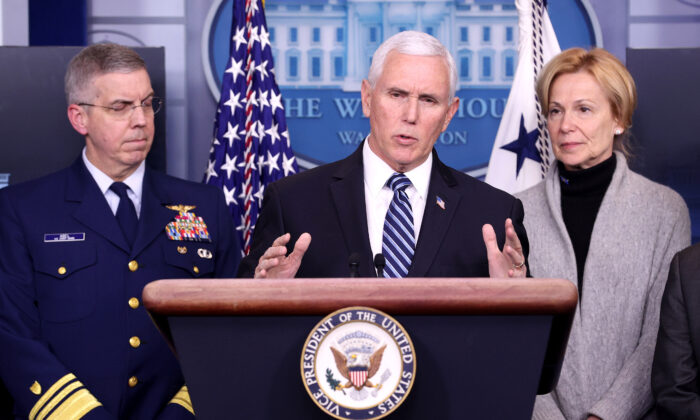 Vice President Mike Pence and members of the Coronavirus Task Force hold a press briefing at the White House in Washington on March 6, 2020. (Win McNamee/Getty Images)
By Emel Akan

“We have been able to provide tests to all the state jurisdictions and labs that have requested it,” Pence said at a press conference, adding that commercial labs have also stepped in to develop tests to meet the future demand.

“LabCorp and Quest, two of America’s leading commercial laboratories, have announced that tests will be available by [March 9],” Pence said, adding that the “enormous capacity” of these labs will make tests available to local doctors, pharmacies, and MedChecks across the country.

The U.S. death toll from the COVID-19 surged to 19 over the weekend. The number of infections increased to more than 400 across the country, with Washington, California, and New York states being hit the hardest.

“The good news is most Americans who have contracted this disease are being treated and recovering and on the road to recovery,” Pence said, urging elderly people to use common sense and caution.

Speaking at the press conference, Dr. Anthony Fauci, director of the National Institute of Allergy and Infectious Diseases, said elderly Americans with underlying conditions are the “most vulnerable to getting the complications of serious disease and even death.”

These underlying conditions, he said, include heart, lung, and kidney disease, and diabetes.

“If you are a person in that category, think twice” before getting on a plane or going to a crowded place, he said.

The Trump administration has provided regulatory relief to accelerate the development of new diagnostic tests. As a result, four labs have begun patient testing to minimize the shortage, FDA Commissioner Stephen Hahn said at a separate press conference on March 7.

He said the CDC had already shipped tests that are capable of testing nearly 75,000 individuals. He added that all state public health labs have received these tests.

In addition, the manufacturer Integrated DNA Technologies (IDT), has shipped more than 1.1 million tests to nonpublic health labs, he said. Another 1 million tests by IDT and other manufacturers will be ready by March 9, after undergoing qualification by CDC.

“IDT and other manufacturers believe they can scale up production so that by the end of next week, an additional 4 million tests could be shipped,” Hahn said.

Hahn also addressed the recent manufacturing problems with the CDC test that contributed to a nationwide supply problem.

“There were manufacturing problems with the CDC test,” Hahn said. “While those issues have been resolved, at the time, this created complications for expanding access for public health laboratories and other developers who might use the CDC test as the basis for development of their own test.”

Pence, who leads the White House Coronavirus Task Force, announced on March 6 that 21 people on the Grand Princess cruise ship being held off the California coast tested positive for COVID-19. Of the 21 people who tested positive, 19 are crew members, and two are passengers. The ship returned to San Francisco after visiting Hawaii.

The ship will proceed to the Port of Oakland on March 9 to begin disembarking passengers, according to the update provided by Princess Cruises.

“All passengers and crew will be tested for the virus. Those that will need to be quarantined will be quarantined. Those who will require additional medical attention will receive it,” Pence said.

The ship has nearly 1,100 crew members, who are expected to be quarantined on board the vessel, Pence said.

The vice president met with airline industry executives on March 4 to get more data on airline passengers exposed to the disease. He also met on March 7 with cruise-line executives in Florida to discuss what additional measures these companies can take to improve the health and safety of passengers.

In January, the Trump administration ordered sweeping travel restrictions to prevent the spread of the disease, barring all foreign nationals who have been to China in the past 14 days from entering the United States.

The administration later expanded the existing ban on travel from Iran in response to the increasing coronavirus cases in that country.

And as of March 3, the administration fully implemented a screening process for travelers from Italy and South Korea.

President Donald Trump, who was criticized for his response to the outbreak, defended his administration’s handling of the coronavirus on March 8 via Twitter.

“We have a perfectly coordinated and fine tuned plan at the White House for our attack on CoronaVirus,” Trump wrote on Twitter on March 8. “We moved VERY early to close borders to certain areas, which was a Godsend. V.P. is doing a great job. The Fake News Media is doing everything possible to make us look bad. Sad!”