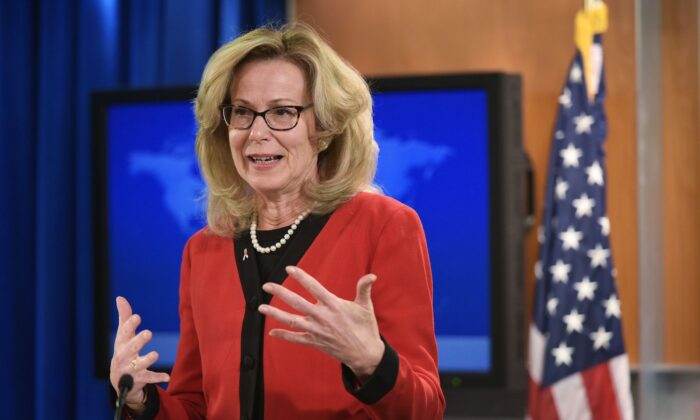 US Global AIDS Coordinator & US Special Representative for Global Health Diplomacy Deborah Birx speaks during a briefing at the State Department in Washington, on Nov. 30, 2017. (Mandel Ngan/AFP via Getty Images)
AMERICA

Vice President Mike Pence announced on Thursday that a global health official and leading expert in HIV/AIDs, Deborah Birx, has been appointed to serve as the White House’s coordinator to combat the spread of the deadly novel coronavirus.

“Dr. Birx serves as the U.S. government’s leader for combatting HIV/AIDS globally and will continue to oversee this critical work through her able Deputy Angeli Achrekar, while bringing her interagency expertise and coordination that brought ground-breaking progress to the global HIV/AIDS pandemic to the coronavirus response in the White House,” Pence said in a statement on Thursday.

Birx is currently the U.S. Global AIDS Coordinator and U.S. Special Representative for Global Health Diplomacy—roles she has held since 2014.

Prior to 2014, Birx had previously coordinated between the Army, Navy, and Air Force in their HIV/AIDS efforts. She also led the CDC’s Division of Global HIV/AIDS and Center for Global Health in their global implementation of the President’s Emergency Plan for AIDS Relief program.

In her new role as the White House Coronavirus Response Coordinator, Birx will be detailed to Pence’s office and report directly to him. She will also join the Coronavirus Task Force led by Health and Human Services Secretary Alex Azar, the White House said. The task force is being coordinated through the National Security Council and Birx will be supported by NSC staff.

“She has developed and patented vaccines, including leading one of the most influential HIV vaccine trials in history,” Pence announced. “Three different Administrations across both political parties have relied on her knowledge and judgement.”

“She has worked from the research bench to the clinic but understands the primary focus must always be to reach the individuals most in need. She will bring her infectious disease, immunologic, vaccine research, and interagency coordinating capacity to this position,” he added.

The news comes a day after Trump called on Pence to lead the coronavirus task force in coordinating an “all-of-government” response, with health agencies reporting directly to Pence.

“I’m going to be putting our Vice President Mike Pence in charge, and Mike will be working with the professionals, doctors, and everybody else that’s working,” Trump said, adding that Pence will then report back to him.

Following Trump’s announcement, Azar clarified on Thursday that he remains the chairman of the coronavirus task force.

“I will remain the chairman of the interagency task force,” Azar said. “What the vice president will do is actually a function that’s very similar to what acting chief of staff Mick Mulvaney has been very ably doing for me, which is, I’m in constant communication with him, and he’s able to clear barriers, get alignment across cabinet departments and agencies, and frankly, deal with and coordinate areas that are outside of the healthcare expertise—broader economic questions, trade issues, etc.”

Speaking at the annual Conservative Political Action Conference (CPAC) on Thursday, Pence said that the risk to the American public “remains low” but the administration is “ready for anything,” and that the current climate “is not the time for partisanship.”

“Yesterday, President Trump directed me to lead a whole-of-government approach to address the coronavirus in the country,” Pence said. “And I promise you we will continue to bring the full resources of the federal government to bear to protect the American people.”

Pence has prior experience dealing with a viral outbreak. He was the governor of Indiana when the first domestic case of the Middle East Respiratory Syndrome (MERS) was confirmed in the state.

There have been 60 confirmed cases of the virus in the United States, 42 of which originated from passengers from the Diamond Princess cruise ship that was quarantined off Yokohama, Japan, earlier this month. Three cases of coronavirus were in those who were evacuated from Wuhan to the United States. The remaining 15 cases were detected in six states—Arizona, California, Illinois, Massachusetts, Washington, and Wisconsin—with the 15th case northern California possibly being the first case of human-to-human transmission from an unknown source, according to the U.S. Centers for Disease Control.

Ivan Pentchoukov and Bowen Xiao contributed to this report.