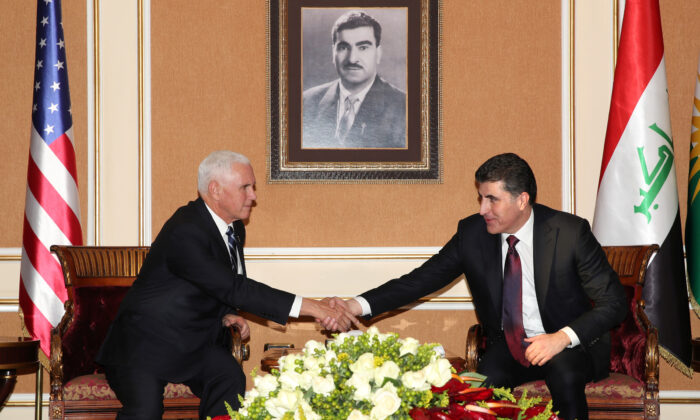 Pence Meets With Kurds, Says ‘They Know the American People Are With Them’

Vice President Mike Pence said that the Kurds know the United States stands with them even after the U.S. military largely withdrew from Syria under orders from President Donald Trump.

Pence made a surprise visit to Iraq over the weekend and met with some Kurds there. The Iranian ethnic group has pockets in Syria, Iran, Iraq, and Turkey.

“I don’t think there was any confusion now among the leadership here in the Kurdish region that President Trump’s commitment to our allies here in Iraq, as well as to those in the Syrian Defense Forces, the Kurdish forces who fought alongside us, is unchanging,” Pence told reporters.

Trump wants to withdraw all troops from Syria but some 500 have remained in the region to prevent the ISIS terror group from regaining access to oil fields, a crucial source of revenue.

“They know now that while President Trump is absolutely determined to bring our troops home—and that was the basis for the President’s decision in moving our troops out of the border region on the Syrian-Turkish border—that, nevertheless, we’re going to continue to maintain a presence in Syria and, of course, here in Iraq that reflects the strong and enduring partnership that we have with the Iraqi people, including the Kurdish people in Iraq and in Syria,” Pence said.

Pence met with Nechirvan Barzani, president of the semiautonomous Iraqi Kurdistan region, and other leaders.

Barzani praised America in remarks before his meeting with Pence, telling him that without the support the U.S. military provided in the fight against ISIS, the leaders likely wouldn’t have been able to meet in Erbil, before adding, “We hope that you convey our sincere gratitude and thanks to President Trump.”

“In March of this year, because of the courage of our armed forces and the courage of the Peshmerga and our Kurdish allies in Syria, we were able to capture the last inch of territory controlled by ISIS in Syria. And this would not have been possible without the extraordinary alliance and partnership between the Kurdish people and the people of the United States,” Pence told Barzani.

After the meeting, Pence told reporters that Kurdish leaders knew the American people supported them.

“I was encouraged to hear from President Barzani of how—President Trump’s resolve in holding Turkey to the ceasefire that they agreed to, when our delegation went to Ankara last month. And my sense is that—that now, with our troops in the region and in the air, that Kurdish forces, Syrian Democratic Forces, as well as the Kurdish population here in the Kurdish region, know that the American people are with them. And these are allies who fought shoulder to shoulder with us and bravely sacrificed greatly to defeat ISIS not only in Iraq, but in Syria,” he said.