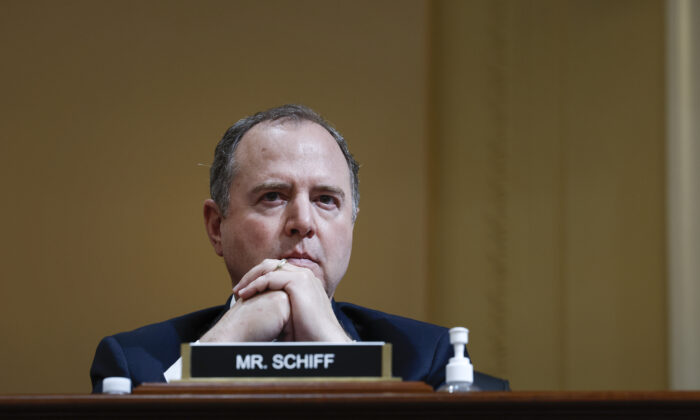 U.S. Rep. Adam Schiff (D-Calif.) listens during the third hearing by the Select Committee to Investigate the January 6th Attack on the U.S. Capitol in the Cannon House Office Building in Washington on June 16, 2022. (Anna Moneymaker/Getty Images)
Democrats

Pence May Be Subpoenaed By Jan. 6 Panel: Schiff

Former Vice President Mike Pence may be subpoenaed by the House of Representatives panel investigating the Jan. 6, 2021 breach of the U.S. Capitol, a member of the panel said over the weekend.

“[Mike Pence is] certainly a possibility. We’re not excluding anyone or anything at this point,” Rep. Adam Schiff (D-Calif.), who serves on the Democrat-dominated committee, said on CNN’s “State of the Union” on Sunday.

“We’re not taking anything off the table in terms of witnesses who have not yet testified. We would still, I think, like to have several high-profile people come before our committee,” Schiff said.

He added: “At the moment, I can’t disclose what private conversations may or may not be going on with respect to certain individuals. But there are still key people we have not interviewed that we would like to.”

Pence’s organization did not immediately respond to a request for comment.

Pence drew anger from then-President Donald Trump and his supporters in 2021 when he refused to get behind a Trump-backed scheme to pause the certification of electoral slates in several contested battleground states.

The key issue presented during the third day of hearings revolved around the efforts of Trump and some of his allies to have Pence stop the certification of electoral votes until claims of widespread election fraud had been adjudicated.

Under the text of the 12th Amendment, Trump allies argued, Pence was legally granted the power to hold off the certification of electoral votes; others in and around the White House, however, rejected this claim.

In the end, Pence sided with those rejecting Trump’s claim—a decision he explained in a February interview with The Federalist Society.

“There are those in our party who believe that as the presiding officer over the joint session of Congress that I possess unilateral authority to reject Electoral College votes.”

“I had no right to change the outcome of our election,” Pence said, rejecting the claim. “Kamala Harris will have no right to overturn the election when we beat them in 2024.”

During its most recent public hearing, the Jan. 6 commission praised Pence for courage in withstanding a behind-the-scenes pressure campaign by Trump and his key legal ally, Dr. John Eastman, as well as others like former New York City Mayor Rudy Giuliani.

The commission also claimed that, with the effort, Trump had put Pence’s life in danger.

But despite their praise of the former vice president, Schiff’s comments indicate Pence may also find himself in the committee’s targets.

Attitudes toward the Jan. 6 panel, which was formed over the summer of 2021 by a nearly party-line vote, have broken down largely along party lines.

Only two Republicans, Reps. Liz Cheney (R-Wyo.) and Adam Kinzinger (R-Ill.) sit on the commission. Most of the rest of their party, including Trump and dozens of other Republicans, have blasted the committee as a “partisan witch hunt,” and have promised to carry out their own investigations if they retake the House in November.

Democrats, by contrast, have praised the committee as a necessary body for looking into what they have called an attempted “insurrection” by Trump and his allies.

Despite bold claims and interviews with dozens of former Trump staffers, the Jan. 6 commission has yet to produce any more than circumstantial evidence proving their claim that Jan. 6 was an attempted insurrection.

If Pence were to be subpoenaed, he would be the highest ranking official to come into the commission’s sights.

So far, each has refused to accept the subpoenas, which may face challenges in the court system.

It is not clear if Pence, who has largely kept himself out of the limelight since leaving office, would accede to such a request by the Jan. 6 panel.