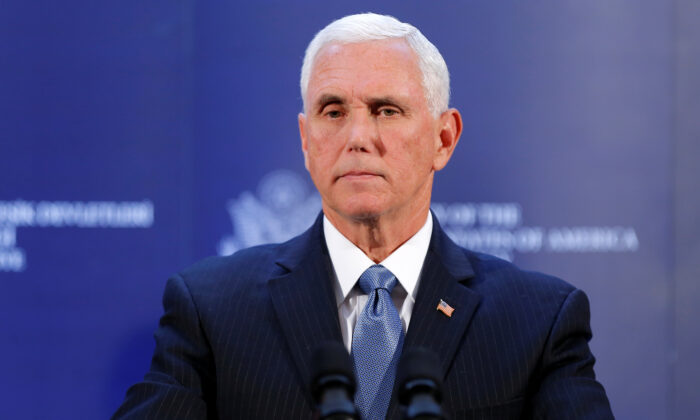 “The impeachment hearings today reached a new low,” Pence told reporters in Michigan. “I just heard at the hearing today, one of the Democrats’ witnesses actually used the president and first lady’s 13-year-old son to justify their partisan impeachment. Democrats should be ashamed.”

“Enough is enough,” he added. “This sham impeachment should end, and congress should get back to work on issues that are important to the American people.”

Karlan, a Democrat-selected witness who testified in front of the House Judiciary Committee, prompted backlash when she referenced the youngest child of the president and First Lady Melania Trump.

“Contrary to what President Trump has said, Article 2 does not give him the power to do anything he wants, and I’ll just give you one example that shows you the difference between him and a king, which is the Constitution says there can be no titles of nobility, so while the president can name his son Barron, he can’t make him a baron,” the law professor explained.

Following a chorus of Republican backlash, the first lady tweeted that “a minor child deserves privacy and should be kept out of politics.”

“Pamela Karlan, you should be ashamed of your very angry and obviously biased public pandering, and using a child to do it,” she said.

The law professor later apologized for the attempt at a joke but also said Trump should apologize.

“I want to apologize for what I said earlier about the president’s son. It was wrong of me to do that. I wish the president would apologize, obviously, for the things that he’s done that’s wrong, but I do regret having said that,” she said.

The Democrats on the committee selected the University of North Carolina Law School’s Michael Gerhardt, Harvard Law School’s Noah Feldman, and Karlan for testimonials. They argued that Trump’s actions as laid out by the House Intelligence Committee constitute an impeachable offense.

The lone Republican witness was George Washington University law professor Jonathan Turley, who argued that the House is moving too quickly without evidence and also suggested that the Democrats are abusing their power.