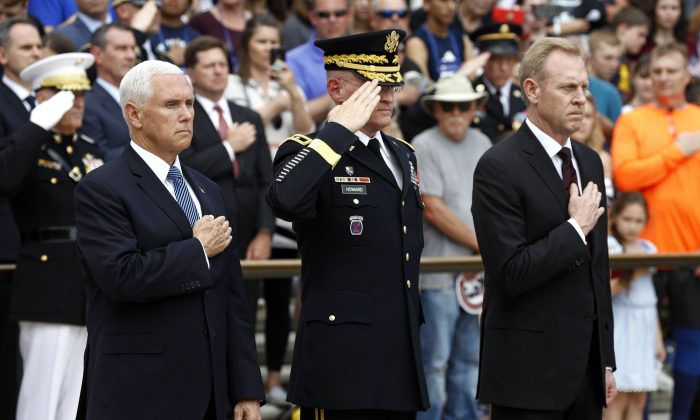 ARLINGTON, Va.—Vice President Mike Pence paid tribute to fallen members of the U.S. armed forces on May 27, thanking their loved ones in a ceremony at Arlington National Cemetery and acknowledging that for them “every day is Memorial Day.”

Pence placed a wreath at the Tomb of the Unknown Soldier to remember dead service members whose remains haven’t been identified and observed a moment of silence. He told Gold Star families he was honored by their presence.

President Donald Trump and First Lady Melania Trump visited the Arlington, Virginia, cemetery last week and placed flags at several gravesites, a decades-old tradition known as “flags in.” Trump, in Japan, was expected to address troops aboard a battleship before returning to the United States.

The president and first lady made an unannounced visit to Arlington Cemetery on Thursday, May 23 to pay their respects to fallen soldiers.

Donald Trump wished to visit the soldier’s graves ahead of his trip to Japan, where he will attend an event to meet U.S. troops at Yokosuka Naval Base to mark Memorial Day, which is observed on Monday, May 27, according to The Hill.

The presidential motorcade arrived outside Arlington Cemetery at 2:20 p.m.

During their 20-minute visit to the cemetery, the first couple laid flags in section 34, where the headstone of Fred Buckles, the last living veteran of World War I, is located, according to the White House press pool.

“Honored to be at @ArlingtonNatl today & take part in #FlagsIn to remember our fallen heroes,” The first lady wrote on Twitter. “God Bless our military, their families & God Bless our great Nation! @USArmyOldGuard.”

On Memorial Day each year, a flag is placed by every tombstone in memory of the more than 400,000 men and women who fought for freedom for America. In 2018 on Memorial Day, Trump spoke of the fallen soldiers’ love for their country as being “more deep and more pure than most will ever know.”

“They marched into hell so that America could know the blessings of peace. They died so that freedom could live,” he said.

On April 11, Trump hosted four World War II veterans at the White House. He said the veterans were “great heroes, great warriors, highly respected,” from a time when “we knew how to win wars.”

In June 2018, the president had made a promise to 95-year-old Allen Jones.

“I’m going to be 95 years of age on April 11 of next year,” retired sergeant Jones told the president while appearing with him at a Kansas City VFW event. “Hopefully, you will allow me to bring my family into the Oval Office to meet you,” to which the president replied with an enthusiastic “Yes!”

Jones celebrated his 95th birthday at the White House, where he was there with three other World War II veterans, including centenarians Floyd Wigfield, Sidney Walton, and Paul Kriner at the Oval Office.

During his 2019 State of the Union address, Trump honored three veterans who fought for their country in World War II. “On D-Day, June 6, 1944, 15,000 young American men jumped from the sky, and 60,000 more stormed in from the sea, to save our civilization from tyranny,” said Trump

“Here with us tonight are three of those heroes: Private First Class Joseph Reilly, Staff Sergeant Irving Locker, and Sergeant Herman Zeitchik. Gentlemen, we salute you,” said the president.

“Why did they do it? They did it for America—they did it for us,” Trump added. “Everything that has come since—our triumph over communism, our giant leaps of science and discovery, our unrivaled progress toward equality and justice—all of it is possible thanks to the blood and tears and courage and vision of the Americans who came before.”

Memorial Day is traditionally observed on the last Monday of May and commemorates all those who died while serving in the United States armed forces.

Honored to be at @ArlingtonNatl today & take part in #FlagsIn to remember our fallen heroes. God Bless our military, their families & God Bless our great Nation! @USArmyOldGuard pic.twitter.com/lJ3lu2KfJG