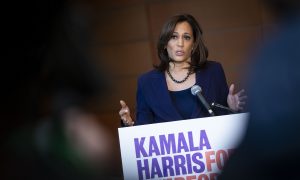 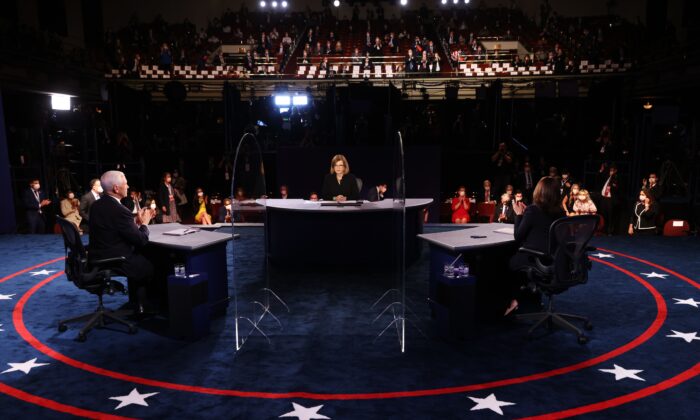 Vice President Mike Pence and challenger Sen. Kamala Harris (D-Calif.) sparred over a series of topics at the 2020 vice presidential debate, which was largely calm and policy-focused.

In the first and only debate between the two candidates contending for the vice presidency in the Nov. 3 election, the candidates largely sidestepped direct questions as they returned to their main policy points related to the broader topic at hand. Standout issues during the Oct. 7 debate included COVID-19, the Supreme Court nomination, the economy, and China.

USA Today’s Washington Bureau Chief Susan Page moderated the planned 90-minute exchange at the University of Utah in Salt Lake City. The exchange had few interruptions and no heated remarks, a stark contrast to the first presidential debate on Sept. 29.

People on social media were quick to point out two novel events during the debate, which included the Chinese regime appearing to have censored remarks by Pence that were critical of the Chinese Communist Party (CCP), and a short period during which a fly landed on Pence’s hair.

Pence and Harris were separated by plexiglass barriers, and people in the audience were socially distanced in measures taken to minimize the transmission of the CCP virus (novel coronavirus).

Harris launched into the debate accusing the Trump administration of having mishandled the CCP virus pandemic and alleged that Pence and President Donald Trump had minimized the seriousness of the virus back in late January.

“The American people have witnessed what is the greatest failure of any presidential administration in the history of our country,” Harris said as she invoked the 210,000 deaths attributed to the CCP virus and alleged that members of the Trump administration “still don’t have a plan.”

Pence gave a lengthy defense, saying that Trump has prioritized the health of Americans and had suspended travel from China at the end of January. The travel ban had exempted some categories of people such as U.S. citizens and permanent residents. Pence noted that Joe Biden had “opposed that decision, said it was xenophobic and hysterical.”

“That decision alone bought us invaluable time … I believe it has saved us hundreds of thousands of American lives,” he said.

Pence accused Biden of having plagiarized the Trump administration’s actions against the CCP virus. He also said that the Trump administration was informed that “if we did everything right we could still lose 100,000 or 200,000 Americans lives.” This accords with what White House coronavirus response coordinator, Dr. Deborah Birx, said back in March.

Both candidates dodged a question about whether they’ve consulted with their presidential candidates about “safeguards or procedures when it comes to the issue of presidential disability.”

Harris instead chose to speak about her background and qualifications, and Pence opted to speak about the 2009 swine flu pandemic, which occurred when Joe Biden was vice president. Pence pointed out that 60 million Americans had contracted the disease and that if it had been as deadly as the CCP virus, it would have cost 2 million American lives.

When asked later in the debate to characterize the United States’ relationship with China, Pence moved quickly to express Trump’s displeasure at China’s mishandling of the pandemic, and contrasted Biden’s “cheerleading for China” with Trump’s “standing up to China.”

Harris was quick to blame the Trump administration’s handling of the pandemic for the loss of American lives.

She also accused the Trump-Pence administration of being responsible for the loss of some 300,000 manufacturing jobs, attributing the loss to Trump’s tariffs on China.

At another point in the debate, Harris accused Trump and Pence of having lost the trade war with China because the nation had seen a loss of thousands of jobs.

“Lost the trade war with China?” Pence responded. “Joe Biden never fought it. He’s been a cheerleader for the Chinese Communist Party for decades.” He noted that the nation lost 200,000 manufacturing jobs when Biden was vice president, and that Obama said such jobs would never return. However, the Trump administration in the first three years created 500,000 jobs due to various actions, including deregulation, Pence said.

“We’ve already added back 11.6 million jobs because we had a president who cut taxes, rolled back regulation, unleashed American energy, fought for free and fair trade, and secured $4 trillion in the Congress of the United States to give direct payments to families, saved 50 million jobs through the Paycheck Protection Program. We literally have spared no expense to help the American people and the American worker through this,” Pence said.

At multiple points throughout the debate, Pence repeatedly raised the matter of Biden-Harris’s “$2 trillion version of the Green New Deal” while Harris repeatedly condemned the Trump administration’s handling of the pandemic.

Pence said that Biden and Harris sought to abolish fossil fuels and ban fracking, which would cost “hundreds of thousands” of American jobs. He accused Biden of wanting to surrender to China.

“Joe Biden wants to repeal all of the tariffs that President Trump put into effect to fight for American jobs and American workers,” Pence said.

Harris told Pence that Biden “will not raise taxes on anyone who makes less than $400,000 a year,” and “will not end fracking.” She also claimed that it was the Obama-Biden administration’s Recovery Act that brought America back from the 2008 recession, “and now the Trump-Pence administration wants to take credit.”

Pence countered Harris during a later topic: “Sen. Harris is denying the fact that they’re going to raise taxes on every American. Joe Biden said twice in the debate last week on day one he was going to repeal the Trump tax cuts. Those tax cuts delivered $2,000 in tax relief to the average family for cost.”

In another memorable exchange, Pence confronted Harris over whether she would support packing the Supreme Court, a move that would expand the number of justices on the bench, allowing a president to add more justices of his or her choosing.

Harris evaded the question and pivoted to speak against the confirmation of Judge Amy Coney Barrett, whom Trump nominated to fill the seat of the late Justice Ruth Bader Ginsburg.

“Joe and I are very clear. The American people are voting right now. And it should be their decision about who will serve on this most important body for a lifetime,” Harris said.

Biden had also refused to provide a definite answer on the matter at the first presidential debate.

Harris accused President Trump of doing his own packing of the courts. Trump has appointed more than 200 federal judges, of whom 50 are appeals court judges, to fill various judicial vacancies left by the Obama administration.

“And do you know that of the 50 people who President Trump appointed to the court of appeals for lifetime appointments, not one is black,” Harris said, apparently concerned about the lack of black representation in the court appointments.

When Harris was asked about her stance on Roe v. Wade, the 1973 Supreme Court ruling that struck down state-level restrictions on abortion, she said, “I will always fight for a woman’s right to make a decision about her own body. It should be her decision and not that of Donald Trump and the Vice President Michael Pence.”

“I couldn’t be more proud to serve as vice president to a president who stands without apology for the sanctity of human life. I’m pro-life. I don’t apologize for it,” Pence responded. “And this is another one of those cases where there’s such a dramatic contrast. Joe Biden and Kamala Harris support taxpayer funding of abortion, all the way up to the moment of birth, late-term abortion, they want to increase funding to Planned Parenthood of America.

“Now, for our part, I would never presume how judges rule on the Supreme Court of the United States but will continue to stand strong for the right to life.”