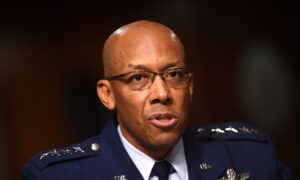 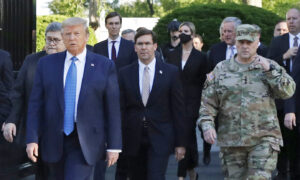 Milley Says He Shouldn't Have Walked With Trump to Church
0 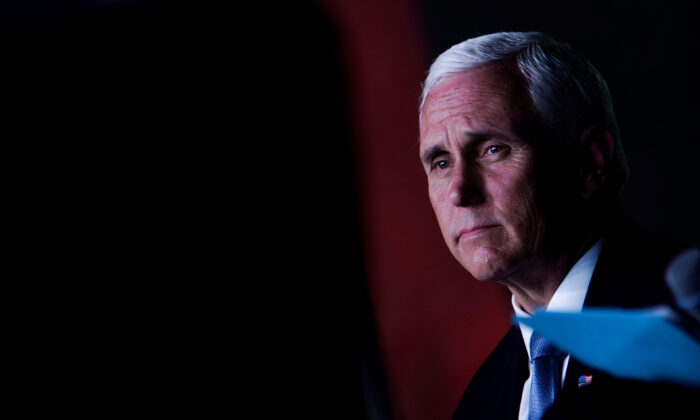 Vice President Mike Pence said he didn’t accompany President Donald Trump to St. John’s Church because of the volatility of the protests and riots around the White House.

“I was actually encouraged to stay at the White House out of an abundance of caution,” Pence told CBS News Radio Friday.

“It was obviously a volatile environment at moments, and so I was encouraged to remain. But I would have been happy to walk shoulder to shoulder across Lafayette Park with President Trump.”

Trump and a group of officials, including Joint Chiefs of Staff Chairman Mark Milley, Attorney General William Barr, and senior advisor Ivanka Trump, traveled on June 1 from the White House to the church, crossing through Lafayette Park.

Trump held a Bible and stood by the church as the group surveyed damage inflicted during riots sparked by the death of George Floyd, a black man who perished in police custody in Minneapolis on Memorial Day.

Milley later apologized for being part of the group, claiming it “created a perception of the military involved in domestic politics.”

Asked about Milley’s remarks, Pence said: “I have great respect for General Milley. He’s leading our Joint Chiefs of Staff with great distinction. And I respect his ability to speak for himself about his presence there. But I must tell you that I thought it was important after we saw one of the most historic churches in America set ablaze by rioters and violent protests that the president walk across Lafayette Park and stand in solidarity.”

“We don’t allow places of worship to be burned in this country. We don’t stand by while churches, or synagogues, or mosques are vandalized and the president made that very clear in his walk and I’m glad that this is an administration that has stood strong for the religious freedom of every American of every faith,” he added.

Every president since James Madison has worshipped at the church, Pence noted. The administration’s quelling of violence in Washington, which allowed peaceful protests to continue, was an “important accomplishment,” he said.

Trump on Thursday said Milley’s remarks were “fine” before saying he believes he has “good relationships with the military.”

Pence was speaking after meeting with black leaders in Pennsylvania.

Ross Owens, a local pastor, told Pence, “I’m tired that people still do not acknowledge that systemic racism is real, and they ignore the billions of voices that exist, and they say, ‘No, that’s not true,’ because of the comfort of their own bubble.”

Racism does exist in America like it does in every other nation, Pence said in the radio interview. He thinks every American can be proud of the progress the nation has made over the centuries and credited people of faith with spurring much of the progress.

The administration is focused on not just progress in public safety, but job creation, educational choice in inner cities, and better healthcare, Pence added.

“The truth is, many African-American families, for more than half a century, have lived under failed liberal Democrat policies and leadership,” he asserted, while arguing that Trump enacted policies that led to low black unemployment and an expansion of educational choice.