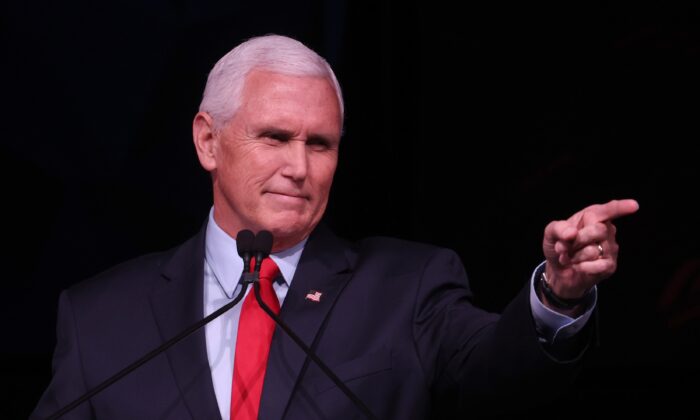 Former Vice President Mike Pence on March 8 declined to rule out running for president in 2024.

“All my focus right now is on 2022,” Pence said when asked if he wanted former President Donald Trump to run and whether he would be joining the race.

“I think we have a historic opportunity to reclaim majorities in the House and the Senate, to elect great Republican governors around America, and in 2023, I’m confident the Republican Party will nominate a candidate who will be the next president of the United States of America,” Pence added. “And at the right time, my family and I will reflect and consider how we might participate in that process.”

Pence, 62, a former congressman who was in office with Trump for one term before losing in the 2020 election, was speaking during an appearance on Fox News.

Republicans hope to flip both congressional chambers in the 2022 midterm elections, but many have an eye on 2024.

Trump, 75, has hinted he will run, and the straw poll at the recent Conservative Political Action Conference in Florida showed he would be in the lead if he announces another shot at the White House.

Nearly 6 in 10 respondents to the poll, conducted among conference attendees, said they’d vote for Trump if he does run.

Pence was among those receiving 1 percent.

“So much for him fading,” pollster Jim McLaughlin told attendees, referring to Trump, who received more votes than the year prior.

Respondents also answered who they’d vote for if Trump didn’t enter the race.

Without Trump, DeSantis received 61 percent and nobody else received more than 6 percent.

Pence was still at 1 percent.

Pence and Trump presented a united front for much of their time in office, but a rift developed over whether Pence could decide between competing slates of electors.

On the morning of Jan. 6, 2021, Pence released a statement saying his oath of office “constrains me from claiming unilateral authority to determine which electoral votes should be counted and which should not.”

Trump soon wrote on Twitter that Pence “didn’t have the courage to do what should have been done” and has since decried Pence’s choice.

Trump has said he won’t formally announce or rule out a 2024 bid until after the midterm elections are over.