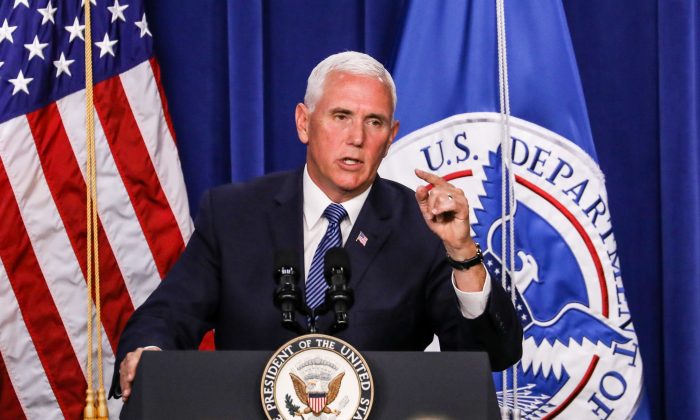 WASHINGTON—Vice President Mike Pence told staff at Immigration and Customs Enforcement (ICE) that the administration backs the agency “100 percent,” during a speech on July 6.

Pence denounced recent Democrat calls to abolish the agency, saying, “I want to make it clear to all of you and all of those looking on: Under President Donald Trump, we will never abolish ICE.”

“Now, let me be clear on this point: The American people have a right to their opinions, but these spurious attacks on ICE by our political leaders must stop,” said Pence. “The type of language that’s being used to describe the men and women of this agency, and the work that you do every day, is unacceptable.”

The outcry over ICE gained steam in June after the administration called for all adult illegal border crossers to be prosecuted. Consequently, around 2,000 children were temporarily separated from their parents while the parents awaited prosecution.

Rep. Mark Pocan (D-Wis.) said on June 30 that he was introducing legislation that would “abolish ICE and crack down on the agency’s blanket directive to target and round up individuals and families,” he said in a statement.

ICE is the Department of Homeland Security’s immigration enforcement arm that operates in the interior of the United States as well as overseas. The agency employs more than 20,000 officers to carry out deportations of illegal and criminal aliens, as well as investigations into drug, gang, and cross-border crime.

In Chicago, ICE arrested more than 50 people in the first week of July, including a reputed gang member, for heroin and fentanyl sales in the city’s West Side.

Pence said ICE made 33,000 arrests last year of “individuals who came into this country illegally and then pursued crime against our people.”

“Nearly a million pounds of narcotics were seized by ICE agents in 2017 alone and, most touchingly to me as a father, ICE agents rescued 518 human trafficking victims and 904 children subject to child exploitation,” he said.

Pence praised ICE agents who “answered a call that requires you to put the lives of your countrymen ahead of your own.”

He said assaults on ICE agents nearly tripled in 2017, while attacks on Customs and Border Protection agents increased by 75 percent.

“Remarkably, but not surprisingly, these attacks have not diminished your commitment or your courage or your determination to enforce our laws,” Pence said.

He told the audience that the Trump administration “will never abolish ICE” and “will never fail to applaud, and expand, and empower this agency with the resources that you deserve.”

He said the White House is pushing Congress to further increase funding to ICE.

“Our word to all the courageous men and women of ICE is: Help is on the way,” Pence said.