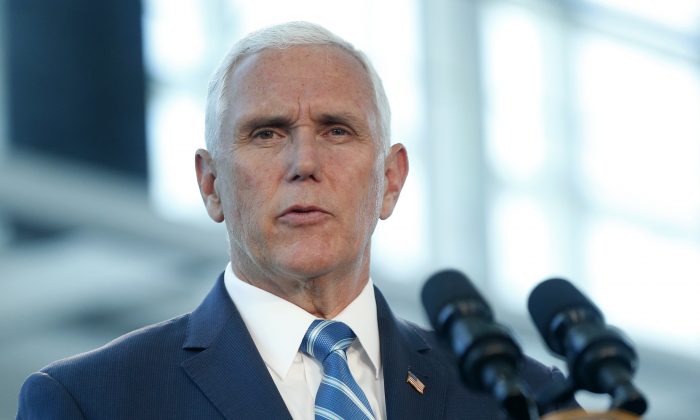 US Vice President Mike Pence addresses media and guests at a press conference at the Port of Miami in Miami, Florida on June 18, 2019. (RHONA WISE/AFP/Getty Images)
US News

WASHINGTON—In a speech to a pro-Israel group on July 8, Vice President Mike Pence knocked Rep. Alexandria Ocasio-Cortez (D-N.Y.) for likening migrant detainment centers near the southern border to “concentration camps” of the Holocaust.

Speaking at a summit in Washington hosted by Christians United for Israel, a pro-Israel evangelical organization, Pence said the comparison was an insult to the 6 million people who lost their lives in the concentration camps of Nazi Germany.

“We must never allow the memory of those lost in the Holocaust to be cheapened as a cliché to advance some left-wing political narrative,” Pence said.

“Last month, a leading Democrat in Congress actually compared our U.S. Customs and Border Protection detention facilities to concentration camps,” he said, without mentioning the freshman congresswoman’s name. “Her allies in Congress, the left, and in the media shamefully came to her defense.”

The vice president defended law-enforcement personnel, saying that the comparison of their “noble and compassionate” work to “the horrors of the Holocaust is an outrage.”

Ocasio-Cortez’s office didn’t respond to a request for comment.

The freshman congresswoman sparked controversy and received criticism from both sides of the aisle after comparing U.S. border facilities to “concentration camps” in an Instagram video in June. She added the phrase to her post “never again,” a term associated with crimes committed by Nazi Germany during World War II.

Despite the backlash, Ocasio-Cortez has refused to apologize for her remarks and, instead, doubled down on her comments and hit back at her critics on Twitter.

During his speech, Pence also criticized Democrats for claiming that the border crisis was manufactured and for denying additional funding to migrants flowing across the southern border.

“The same members of Congress who had the gall to compare our detention facilities to concentration camps voted against providing additional humanitarian aid to the same facilities they denounced,” Pence said.

The vice president also denounced Democrats for their stance on Israel and anti-Semitism. He took aim at freshman Rep. Ilhan Omar (D-Minn.), one of the first Muslim women in Congress, who earlier had made controversial comments about Israel.

“It’s astonishing to think that the party of Harry Truman, which did so much to help create the state of Israel, has been co-opted by people who promote rank anti-Semitic rhetoric and worked to undermine the broad American consensus of support for Israel,” Pence said.

In more than two years of his presidency, Trump has taken significant steps in favor of Israel, including opening the new U.S. embassy in Jerusalem and officially recognizing the Golan Heights as part of the state of Israel.

Pence also targeted Iran during his remarks at the summit, responding to Tehran’s claims that it had exceeded the limit on uranium enrichment set forth in the Joint Comprehensive Plan of Action negotiated by the Obama administration.

“Let me be clear: Iran should not confuse American restraint with a lack of American resolve,” Pence warned.

Iran recently announced that it began to increase uranium enrichment above a previously set purity limit.

Under the 2015 nuclear deal, Iran agreed to keep its enriched uranium below 3.67 percent. However, an Iranian official on July 8 said that Tehran reached 4.5 percent uranium enrichment and threatened to go as high as 20 percent in the future.

“We hope for the best, but the United States of America and our military are prepared to protect our interests and protect our personnel and our citizens in the region,” Pence said.

He noted that the U.S. sanctions are already having an effect on the country.

“The Iranian economy is really under unprecedented U.S. sanctions. Now, Iran must choose between caring for its people and continuing to fund its proxies who spread violence and terrorism throughout the region and breathe out murderous hatred against Israel,” he said.