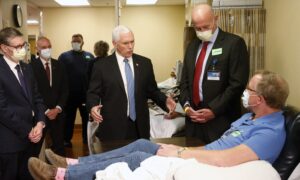 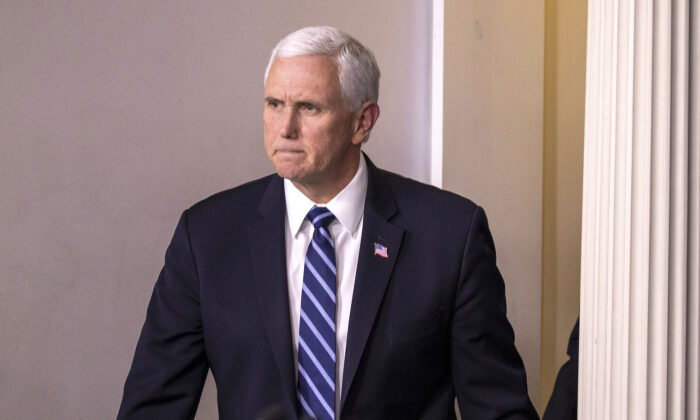 Vice President Mike Pence arrives for a briefing on the Trump administration's CCP virus response in the press briefing room of the White House in Washington on March 4, 2020. (Tasos Katopodis/Getty Images)
US News

Pence: ‘Beyond the pale’ for Virginia State to Sanction Church For Holding 16-Person Service

Vice President Mike Pence said Wednesday that it is “beyond the pale” for Virginia state to sanction a church for holding a 16-person church service on Palm Sunday.

Pence was responding to news that the Department of Justice (DOJ) is siding with the Lighthouse Fellowship Church on Chincoteague Island, which is suing Gov. Ralph Northam after a pastor was threatened with a $2,500 fine or jail time for violating the state’s CCP virus lockdown restrictions.

“Even in the midst of a national emergency, every American enjoys our cherished liberties, including the freedom of religion,” Pence said during an interview with “The Brian Kilmeade Show” on Fox News Radio.

On April 5, Pastor Kevin Wilson was served a summons for violating the Virginia Constitution, after he held a service for 16 people in the church, which usually holds up to 293 people. Those who attended the service were reportedly spaced far apart from one another.

According to the church’s federal lawsuit, a police officer entered the church, made “unprovoked hostile and threatening statements” to attendees, and told a member “they could not have more than 10 people spaced 6 feet apart.”

“The very idea that the Commonwealth of Virginia would would sanction a church for having 16 people come to a Palm Sunday service when I think the church actually seats about 250 was just beyond the pale,” Pence said.

The DOJ told Fox News in a statement this week that the Commonwealth of Virginia has not provided a valid reason “for refusing to trust congregants who promise to use care in worship in the same way it trusts accountants, lawyers, and other workers to do the same.”

Pence, who heads the White House Coronavirus Task Force, said he is “truly grateful” for Attorney General Barr for “standing by religious liberty.”

“As we approach the National Day of Prayer this Thursday, we’re going to be celebrating the faith of the American people and the freedom to practice and live out our faith everyday,” Pence continued.

“That’s why I wanted to speak out in favor of the DOJ’s action and just to assure every American that we are going to stand by men and women of faith of every religion in this country and protect—even in this challenging time—protect their freedom of religion.”

Northam said Monday that the state could start reopening on May 15, as he extended his stay-at-home order until May 14.

“I anticipate moving into phase one on the 15th,” the governor said at a press conference.

“You’ll be able to get your haircut but you’ll need an appointment. … You can go out to eat again but restaurants will use less of their seating so to spread people out more. … You can go to the gym, but with fewer people and more requirements for cleaning.”

Officials still aren’t completely sure if reopening can start, prompting the extension of the harsh order.

Since March, Virginians have been largely confined to their houses and ordered not to leave except for so-called essential trips. As most states in the nation reopen or move toward reopening, Northam has so far resisted calls to ease restrictions along with neighboring Maryland and the District of Columbia.

Under phase one, in-person gatherings at churches and other houses of worship will be allowed with social distancing measures.