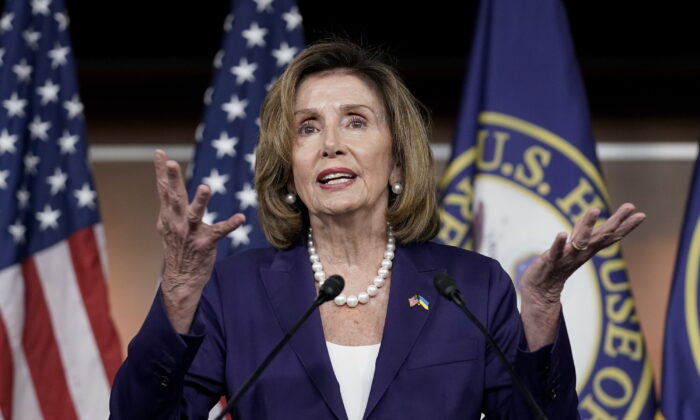 Speaker of the House Nancy Pelosi (D-Calif.), speaks during a news conference at the Capitol in Washington, on July 29, 2022. (J. Scott Applewhite, File/AP Photo)
Democrats

House Speaker Nancy Pelosi (D-Calif.) is not vying to become the next U.S. ambassador to Italy, her office said on Tuesday in denying a rumor that was floated this week.

Fox Business host Maria Bartiromo, citing anonymous sources, reported that Pelosi would be interested in the role if Republicans take control of the House in the 2022 midterms. Those sources, she said, claimed Pelosi wants President Joe Biden to nominate her to become the ambassador to the European country.

Sen. Rick Scott (R-Fla.) on Tuesday told Bartiromo during a segment that he thought Pelosi would “have a hard time” being confirmed in the Senate, saying that it would be “very difficult for Republican Senators” to approve her nomination.

Longtime Pelosi spokesman Drew Hammill told news outlets Tuesday that the claim is “an anonymous rumor” while the speaker hasn’t discussed the matter with anyone.

“The Speaker has no interest in this position and has not discussed it with anyone in the White House,” Hammill said in a statement. “This is the second time Maria Bartiromo has proceeded with reporting anonymous rumors about the Speaker’s future that have no merit. And the second time she has failed to ask us for comment before airing or publishing this utter nonsense.”

Hammill in October 2021 disputed claims Pelosi was seeking an ambassador position, writing on Twitter that “it’s not a rumor when you’ve been told repeatedly it’s false.”

Currently, the United States does not have a Senate-confirmed ambassador to Italy after former envoy, Lewis Eisenberg, left the post in January 2021. Shawn P. Crowley is the charge d’affaires of the U.S. Embassy in Italy.

Republicans, meanwhile, have to win a net five House seats to retake the lower chamber in the 2022 elections. Historically, the party of the president tends to lose congressional seats during the midterms.

In early January 2021, Pelosi was reelected as House speaker in a 216–209 vote. Five Democrats defected.

Previously, some members of the House Democratic caucus publicly suggested that Pelosi step down as speaker and hand over the position to a younger party leader. Days after the November 2020 election, Pelosi said she would honor a pledge made in 2018 that she would not seek reelection after her current term ends.

Correction: Sources statement has been corrected to note claim that Pelosi wants Biden to nominate her as ambassador. The Epoch Times regrets the error.