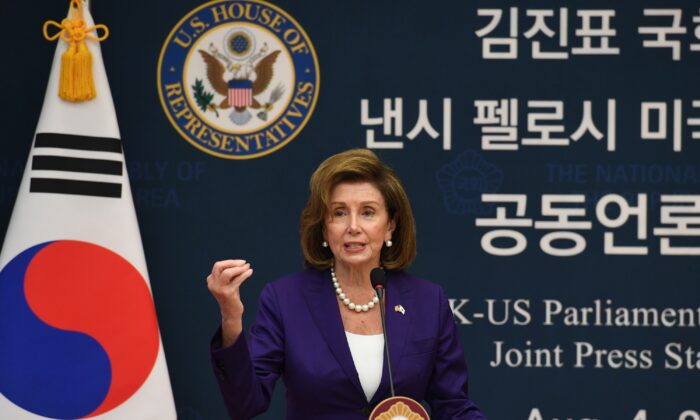 Speaker of the House Nancy Pelosi (D-Calif.) visited the South Korean side of the Korean Demilitarized Zone (DMZ) on Aug 4. as part of her controversial Asia trip.

Pelosi’s visit to Taiwan set off alarm bells about a potential conflict with China, which threatened a military response if Pelosi followed through on the trip.

After Pelosi’s arrival, China ratcheted up military activity in the region. Tensions have escalated as China has commenced live-fire exercises in the Taiwan Strait, including the launch of 11 active missiles near the island.

The regime in Beijing was so displeased with Pelosi’s Taiwan visit that China’s Vice Foreign Minister, Xie Feng, summoned U.S. Ambassador to China Nicholas Burns late on Aug. 2. According to China’s state-run media outlets, Xie said the United States will “pay the price” for its “mistakes” of allowing the speaker to visit the island.

China’s Ambassador to the United States Qin Gang accused the United States of “playing with fire” in a statement. He said he has lodged a “strong protest” with the White House National Security Council and the U.S. State Department.

After visiting Taiwan, Pelosi traveled to South Korea, another U.S. ally, where she met with top South Korean legislators before moving on to visit the DMZ. Currently, around 29,000 U.S. soldiers are stationed in the southern half of the peninsula.

“It was a privilege to engage with American heroes in uniform on the ground in Korea, led by Gen. Paul LaCamera, Commander, U.S. Forces Korea. During visits to the Demilitarized Zone/Joint Security Area (DMZ/JSA) and Osan Air Base, we conveyed the gratitude of the Congress and the Country for the patriotic service of our Servicemembers, who stand as sentinels of Democracy on the Korean peninsula,” Pelosi said in an Aug. 4 statement.

“The United States and South Korea share a strong bond formed for security and forged by decades of warm friendship. Our Congressional delegation traveled to Seoul to reaffirm our treasured ties and our shared commitment to advancing security and stability, economic growth, and democratic governance,” Pelosi added.

Pelosi received an outpouring of support for her Taiwan visit from 26 Republican senators, who signed a letter on Aug. 2 expressing support for the visit.

During her visit to Taiwan, Pelosi suggested that the visit fits into a larger conflict between democracy and autocracy, likely a reference to Russia’s ongoing military invasion of Ukraine.

“Today the world faces a choice between democracy and autocracy. America’s determination to preserve democracy here in Taiwan and around the world remains ironclad,” Pelosi said.

She said the bedrock of the bilateral relationship remains with the Taiwan Relations Act, which authorizes the United States to provide the island with military equipment for self-defense. The act of U.S. Congress was signed after Washington ended its diplomatic ties with Taipei in favor of Beijing in 1979.

“Today, our delegation, of which I’m very proud, came to Taiwan to make unequivocally clear—we will not abandon our commitment to Taiwan, and we are proud of our enduring friendship,” Pelosi said. “Now more than ever, America’s solidarity with Taiwan is crucial.”

While in South Korea, she met in the capital Seoul with South Korean National Assembly Speaker Kim Jin-pyo and other prominent members of the South Korean legislature.

“We also come to say to you that a friendship, a relationship that began from urgency and security, many years ago, has become the warmest of friendships,” Pelosi said during a press conference, recalling the beginning of the United States’ relationship with the nation during the Korean War.

However, in order to avoid escalating already-rising tensions, Pelosi did not comment on her visit to Taipei or on China’s ongoing live-fire exercises.

Instead, Pelosi discussed concerns over nuclear threats from North Korea and expressed support for the efforts of both of their nations to denuclearize the peninsula through deterrence and diplomatic outreach.

China has not responded to Pelosi’s Aug. 4 visit to the Korean DMZ. The Chinese Communist Party has long taken on a protective role toward the communist north, which they generally consider an important buffer zone to avoid having U.S. troops directly along their border.