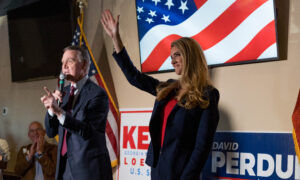 Pelosi was reacting to Trump’s signing of the $900 billion stimulus package that was tied to a larger omnibus bill. The package authorized direct payments and checks for up to $600.

“The signing of the bipartisan, bicameral coronavirus relief legislation is welcome news for the fourteen million Americans who just lost the lifeline of unemployment benefits on Christmas Weekend, and for the millions more struggling to stay afloat during this historic pandemic and economic crisis,” Pelosi wrote in a statement on her website.

But Trump should “immediately call on Congressional Republicans to end their obstruction and to join him and Democrats in support of our stand-alone legislation to increase direct payment checks to $2,000,” the speaker added, remarking that the measure will be brought to the House floor on Monday.

In her statement, Pelosi seemingly attempted to put pressure on Republicans ahead of the Jan. 5 runoff election in Georgia, where two Senate seats are up for grabs.

“Every Republican vote against this bill is a vote to deny the financial hardship that families face and to deny the American people the relief they need,” she said.

Some GOP legislators have expressed concerns about how the stimulus payments would be funded.

“If we went to $2,000 per person, the additional borrowing would be up to almost $500 billion,” Sen. Mitt Romney (R-Utah) said, according to KUTV. “Someone’s got to pay for that. We can’t just have free money.”

Romney qualified his remarks by saying that he opposes $600 payments as well.

After Pelosi said she would call a House session to vote on $2,000 stimulus payments on Monday, House GOP Leader Kevin McCarthy (R-Calif.) said that Democrats are ignoring other concerns expressed by Trump. He pointed to Trump’s video last week where he said the stimulus bill contained too many unneeded provisions such as foreign aid programs.

House Democrats “have conveniently ignored the concerns expressed by the president, and shared by our constituents, that we ought to reexamine how our tax dollars are spent overseas while so many of our neighbors at home are struggling to make ends meet,” McCarthy said in a statement last week.

“Thus, Republicans will offer a unanimous consent request to revisit the state and foreign operations title of the omnibus so that we can fully address the concerns at hand. It will be up to Speaker Pelosi to decide if she wants to act on behalf of the American people,” he remarked.