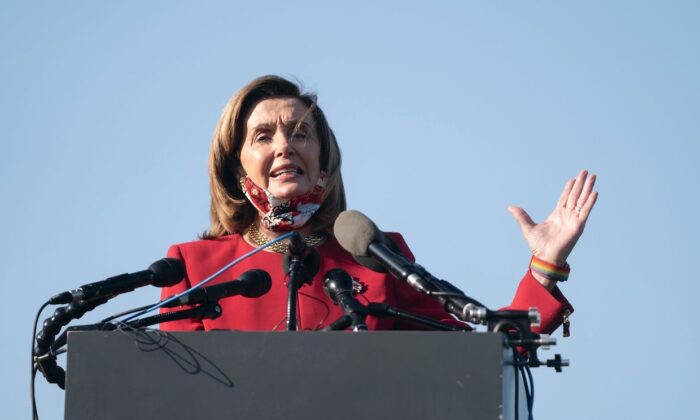 Pelosi to Airlines: Hold off on Furloughs and Firings

House Speaker Nancy Pelosi(D-Calif.) sent a message to Airline CEOs asking them to hold off on furloughs and firings, confirming that a relief bill for airline workers is forthcoming.

“The massive furloughs and firings of America’s airline workers jeopardize the livelihoods of tens of thousands and threaten to accelerate the devastating economic crisis facing our nation.  Today, I am calling upon the airlines to delay their devastating job cuts as relief for airline workers is being advanced in Congress,” Pelosi wrote in a statement Friday.

She said that Congress is on the verge of passing paycheck relief for the airlines.

“We will enact Chairman of the Transportation and Infrastructure Committee, Peter DeFazio’s bipartisan bill or a make the relief part of a comprehensive negotiated relief bill, extending the Payroll Support Program (PPP) for another six months,” Pelosi wrote.

“As relief for airline workers is being advanced, the airline industry must delay these devastating job cuts,” she added.

Thursday, Reuters reported that American Airlines is moving ahead with 19,000 employee furloughs, which Chief Executive Doug Parker confirmed in a memo to employees on Wednesday.

Meanwhile, in an effort to avoid Thursdays’ announcement Airline CEOs met with the White House in mid-Sept. American Airlines CEO Doug Parker spoke to reporters outside the White House after meeting with White House chief of staff Mark Meadows to try to extend the PPP.

“Without action, they’re going to be furloughed on Oct. 1, and it’s not fair. It’s not fair to them, it’s not fair to our country. There’s enormous bipartisan support for an extension of the payroll support program, which would keep those people employed,” Parker said.

“So, we’re just here to plead with everyone involved to get to a COVID relief package before Oct. 1. On Oct. 1 those people are furloughed, and we just want to make people understand that without that, that’s absolutely what’s going to happen, and small communities will lose service.

The first round of PPP for millions including the airline workers, ran out Oct. 1.

The CEOs were asking for another $25 billion to provide sufficient relief for the coming six months.

Meadows told reporters that “if Speaker Pelosi was willing to move a bill to keep people from being laid off in the airline industry that’s stand-alone, that the president would certainly support it.”