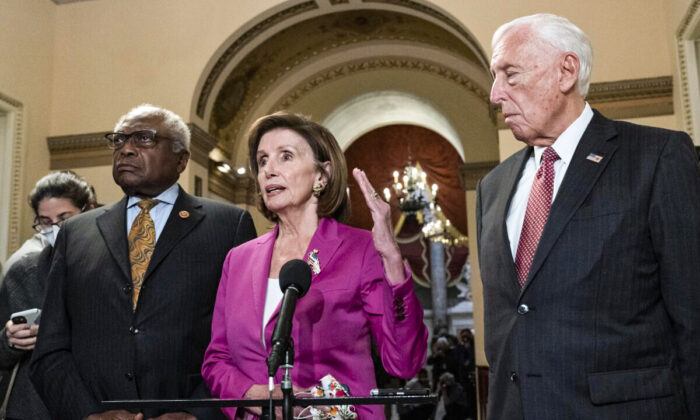 Pelosi Smart in Keeping Her Reelection Plans Close to the Vest, Strategists Say

Speaker of the House Nancy Pelosi declined on Dec. 13 to respond to a CNN report that she’s planning to seek another term in the House of Representatives and that she hasn’t definitively ruled out seeking two more years of holding the gavel.

And keeping everybody guessing her intentions is exactly what she should do, political strategists say.

Easily the most visible congressional Democrat since 2007, when she became the first woman in U.S. history to be chosen as Speaker of the House, Pelosi, 81, said on Nov. 18, 2020—shortly after being renominated as House speaker—that she would abide by her 2018 vow that her current term would be her last.

That vow came in response to demands from a handful of House Democrats who were concerned about Pelosi’s advancing age and that of the other two House leaders, Majority Leader Steny Hoyer (D-Md.), 82, and House Majority Whip Jim Clyburn (D-S.C.), 81.

Rep. Ed Perlmutter (D-Colo.) was the leader of the group of dissident Democrats. Perlmutter’s spokesman didn’t respond to a request from The Epoch Times for comment.

“Speaker Nancy Pelosi will stay until at least after the midterm elections, extending her nearly 20-year run as the House’s top Democrat after she turns 82 and, perhaps, beyond,” the Dec. 13 CNN report reads.

“She is planning to file and run for reelection in her San Francisco district next year—at least for now—in keeping with her pattern of deciding about staying in Congress after the elections, when she likely will have won an 18th full term.

“And sources familiar with Pelosi’s thinking say she isn’t ruling out the possibility of trying to stay in leadership after 2022, despite her original vow to leave as the top House Democrat.”

CNN didn’t name its sources for the story.

All of the Democratic strategists approached by The Epoch Times for comment on Pelosi’s future declined to do so, a measure perhaps of the power and influence she has accumulated in 17 congressional terms. Republicans, however, weren’t so reticent.

“I think she has to say that [she’s running again] until the Build Back Better bill passes, assuming it does,” Matt Mackowiak, president of the Washington and Austin, Texas-based Potomac Strategy Group, told The Epoch Times.

Mackowiak was referring to President Joe Biden’s signature massive social spending legislative proposal, which will cost either $2.4 trillion or nearly $5 trillion, depending upon which of two Congressional Budget Office estimates are used.
“Obviously, if she were to not run again for reelection, it would create even more panic inside the House Democratic Conference. It would also create upward movement in Democratic leadership ranks, which has been something that has really been held back for quite a while,” he said.
Mackowiak said he doubts Pelosi has any interest in becoming House Minority Leader after the 2022 mid-term congressional elections, which Republicans appear set to dominate and retake the majority in the House.
“Do I believe she’s going to go back to be Minority Leader? No, I don’t, just because I don’t think she will stay and do that,” he said. “What is more likely to happen is she will run for reelection, then resign and force a special election for her seat. So I think the odds are she will run again, but when they lose the majority, she will not stay there.”

Brian Darling, former counsel to Sen. Rand Paul (R-Ky.) and founder of Liberty Government Affairs in Washington, said he believes that Pelosi “is on borrowed time as Speaker” due to the political environment created by Biden.

“Pelosi has been a very effective leader for Democrats, and she has done a good job of keeping her fractured caucus together. Yet that is not enough to save Democrats’ next cycle,” Darling said.

“With President Biden’s poll numbers in the dumps, inflation being perceived as a big problem, and no Trump on the ticket, things look really grim for Democrats. It is likely that Democrats lose between 40 and 60 seats in the House, in my estimation.”

Darling also suggested that Pelosi may wish to be done with the increasingly fractious conflicts taking place among the various factions of the House Democratic Conference.
“One of the big problems Democrats have today is that the caucus is fractured,” he said. “The progressives have marginalized Democrats with the American people, thanks to the push to defund the police and promote critical race theory.
“They also are pushing Democrats for a more extreme version of the Build Back Better plan that does not have much support amongst the American people. Moderate Democrats are in grave danger of losing seats thanks to the progressive lurch to the left of President Biden and the leadership coming from Rep. Alexandria Ocasio-Cortez (D-N.Y.) and her socialist squad.”
Mackowiak was also asked whether a big Republican win in 2022 and Pelosi resigning would prompt a domino effect with Hoyer and Clyburn.
“Hoyer would be the natural successor, but if the results are as one-sided as expected right now, it may be very hard for Hoyer or Clyburn or someone else from the senior leadership ranks to succeed her,” he said.