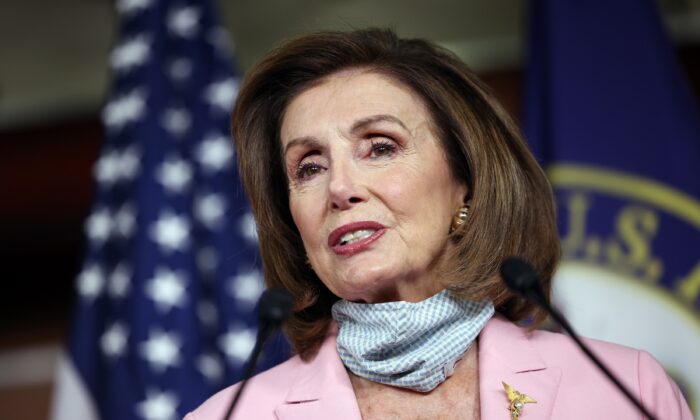 Pelosi: ‘Self-Evident’ Dem’s $3.5 Trillion Spending Bill Will Be Scaled Back

House Speaker Nancy Pelosi (D-Calif.) said on Sunday that President Joe Biden’s $3.5 trillion spending bill, dubbed the “Build Back Better Act,” which is scheduled for a vote on Thursday, will likely be scaled back.

It “seems self-evident” that the reconciliation bill price tag will be smaller than the original proposal of $3.5 trillion, the California Democrat said during an appearance on ABC’s This Week.

“Everybody overwhelmingly, and I think even those who want a smaller number, support the vision of the president,” the California Democrat said. “Adding up what our priorities are should take us to a number where we find common ground.”

Pelosi didn’t elaborate on which spending could be potentially slimmed down, but said that all Democrats, including those who want less spending, “support the vision” of the president.

“We have to find our common ground, respectful of each other’s views. This isn’t about moderates versus progressives,” she added.

Calling the bill “transformative,” Pelosi said she is confident progress will be made on the budget this week.

“We’ll see what we need. We’ll see how the number comes down and what we need in that regard,” the House Speaker said.

Republicans are universally opposed to the $3.5 trillion measure, which passed in the House on Aug. 24 amid the Afghanistan withdrawal crisis. Democratic Sens. Joe Manchin (D-W.Va.) and Kyrsten Sinema (D-Ariz.) also say the price tag is too much.

Progressive Democrats, meanwhile, have again threatened to derail a separate $1.2 trillion infrastructure bill—a second element of Biden’s “two-track strategy” for his Build Back Better agenda—which would finance highway, internet, and other infrastructure projects unless moderates back the bigger $3.5 trillion package as well.

Manchin argued in a Wall Street Journal op-ed earlier in September that the $3.5 trillion measure would create “inflation and debt.”

“Some in Congress have a strange belief there is an infinite supply of money to deal with any current or future crisis, and that spending trillions upon trillions will have no negative consequence for the future,” Manchin wrote. “I disagree.”

Rep. Pramila Jayapal (D-Wash.) chairwoman of the Congressional Progressive Caucus, signaled on Sunday that members of the 96-member group would be open to scaling back the package, but said the caucus haven’t yet received proposals from Senate Democrats.

“What we’ve said is we are happy to hear what it is that somebody wants to cut. So far, we have not seen any negotiation back from the Senate,” Jayapal told CBS‘ Face the Nation. “We understand, Margaret, that we have to get every Democrat onboard in the House and the Senate. We don’t have the margins to do anything except that.”

Senior Democrats earlier this month also indicated that the spending bill will likely be slimmed down.

“So it may be $3.5 (trillion), it may be really close to that, or maybe closer to something else. So I think that we ought to really focus on the American people to think about what takes to get us in a good place and then let the numbers take care of themselves,” Clyburn said on CNN’s “State of the Union” program.