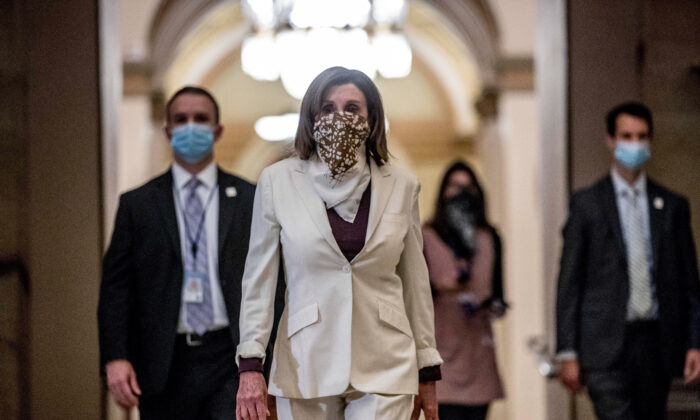 House Speaker Nancy Pelosi (D-Calif.) said that there should be a nationwide mandate to wear face coverings to ward against the COVID-19 pandemic.

“Definitely long overdue for that,” Pelosi told ABC News on Sunday when asked about whether masks should be required. The U.S. Centers for Disease Control and Prevention has recommended—not required—the use of masks.

Vice President Mike Pence offered a contrasting statement, saying Sunday that Trump will leave it to states to decide whether masks should be mandatory to protect against the CCP (Chinese Communist Party) virus, a novel coronavirus that causes COVID-19.

“One of the elements of the genius of America is the principle of federalism, of state and local control. We’ve made it clear that we want to defer to governors. We want to defer to local officials,” Pence said on CBS News.

“If we’d have taken that approach, we’d have never had the success that we had in the greater New York City area. We’d have never had the success in Michigan or New Orleans, because from early on, we worked closely in partnership with governors to make sure that they had what they needed when they needed it, tailored to the unique circumstances in their states,” Pence added.

According to Johns Hopkins University, more than 127,000 Americans have died from the virus so far. The COVID Tracking Project noted on Saturday that in the past several weeks, “deaths have continued to fall, even as cases and hospitalizations spike across the South and West.” About 500 people died from the CCP virus on June 26, the project reported.

In the ABC interview, Pelosi again demanded that the Senate pass the $3 trillion HEROES Act, a stimulus package aimed at tackling economic shortfalls during the pandemic. The measure hasn’t been brought to the floor of the Senate by Majority Leader Mitch McConnell (R-Ky.) after several GOP officials said there were too many unnecessary provisions in the bill.

“It’s time for this administration to take this seriously,” Pelosi said. “As Dr. [Anthony] Fauci said, we have a serious problem ahead.” She was referring to the U.S. infectious diseases expert.

“This is life and death, and we do have a plan to again reverse this trend, as well as to kill off this virus,” Pelosi added. “We don’t have a vaccine, and we don’t have a cure. God willing and science enabling, we will sometime soon, but until we do, we have the tools to halt the growth of this.”

GOP senators and President Donald Trump have signaled that another CCP virus stimulus package that includes direct payments to Americans will be a possibility in the future.

Last week, Trump praised the amount of testing being done in the United States but joked that he wished fewer tests were conducted so the number of confirmed cases would be lower. White House officials and Trump himself said his comments were made sarcastically.