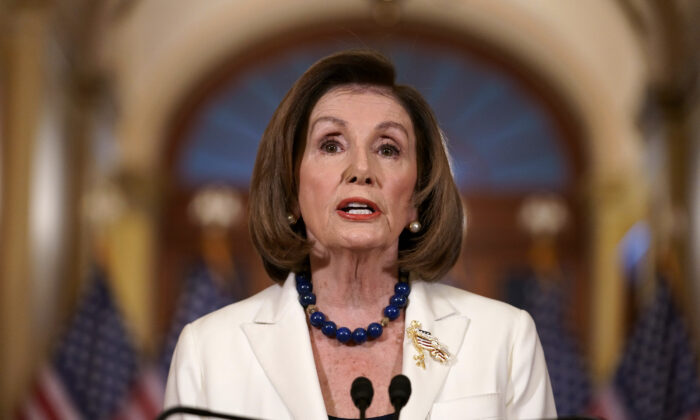 Speaker of the House Nancy Pelosi, D-Calif., makes a statement at the Capitol in Washington, Thursday, Dec. 5, 2019. Pelosi announced that the House is moving forward to draft articles of impeachment against President Donald Trump. (AP Photo/J. Scott Applewhite)
Politics

Pelosi Says She Won’t Pressure Moderate Democrats to Back Impeachment

House Speaker Nancy Pelosi (D-Calif.) said Thursday that party leaders won’t apply pressure to members of the Democratic caucus to support articles of impeachment against President Donald Trump after some Democrats have suggested they won’t vote in favor of the articles.

Pelosi said Thursday that the choice is theirs to make.

“I have no message to them. We are not whipping this legislation, nor would we ever with something like this,” Pelosi told reporters.”They’ll make their own decisions. I don’t say anything to them.”

The House Judiciary Committee on Thursday held a hearing to debate on the two articles of impeachment: abuse of power and obstruction of Congress.

“They’ve seen the facts as presented in the Intelligence Committee—they’ve seen the Constitution, they know it—they take an oath to protect and defend it. But they see the constitutional experts speak about it. They’ll make their own decisions. I don’t say anything to them,” Pelosi said.

“The facts are irrefutable,” she said. “The fact is we take an oath to protect and defend the Constitution of the United States.”

The two articles of impeachment are expected to hit the House floor next week. In her press conference, Pelosi said the House would act to wrap up its impeachment inquiry by that time.

“Next week we’ll take up something,” Pelosi told reporters.

House Minority Leader Kevin McCarthy (R-Calif.) in his weekly press conference assailed Democrats, saying they are essentially making something up to impeach Trump, and have wanted to do so since he took office.

The impeachment process, he added, has “weakened the office of the president” and democracy, ABC News reported.

“I wish they would take one pause and think as an American, what does it do to the country?” he said.

It remains unclear how many moderate Democrats will join Republicans to vote against impeachment. Two in Pelosi’s caucus, Reps. Collin Peterson (D-Minn.) and Jeff Van Drew (D-N.J.), voted against the inquiry rules package several weeks ago.

Peterson has expressed skepticism of the impeachment inquiry while Van Drew has openly criticized it. Both lawmakers represent districts that voted for Trump over Hillary Clinton in 2016.

Van Drew told The Hill that the number of defectors won’t sink the articles of impeachment.

“It’s going to be a low number, I would imagine,” he said. “Maybe three or four—if that.”

Senate Majority Leader Mitch McConnell (R-Ky.) ,meanwhile, said on Tuesday that he would be “totally surprised″ if there were the necessary 67 votes in the chamber to convict Trump, and signaled options for a swift and fair trial. He said no decision had been made about whether to call witnesses.