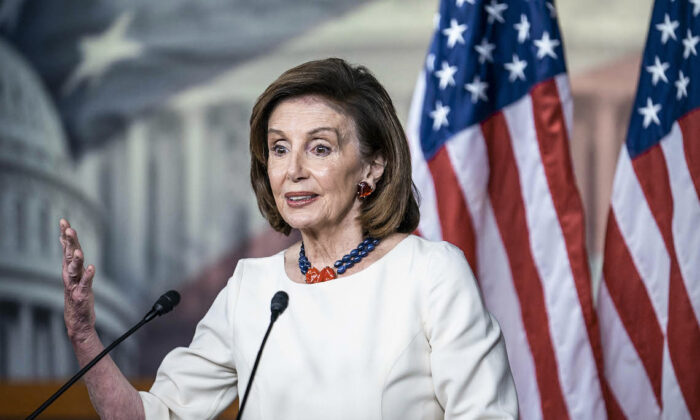 Speaker of the House Nancy Pelosi (D-Calif.) defended efforts by some in her party to include the State and Local Tax deduction (SALT) during her weekly press conference, breaking her silence on the controversy.

SALT has long been a mainstay in the U.S. tax code but was significantly cut by Republicans in 2017.

Under Republicans’ 2017 Tax Cut and Jobs Act, which the majority-Republican Congress passed through the reconciliation process under President Donald Trump, the SALT deduction remained but was capped at $10,000.

Now that they hold Congress, some Democrats are fighting fiercely to raise this cap or remove it altogether.

In the original draft of their $3.5 trillion reconciliation bill, Democrats hoped to reinstate the deduction. But SALT was not included in the compromise budget bill hammered out by President Joe Biden with Senate moderates Joe Manchin (D-W. Va.) and Kyrsten Sinema (D-Ariz.).

Disappointed with this absence, the measure’s proponents have demanded that SALT be reinstated, threatening to not support the bill without the program.

However, Pelosi did not definitively weigh in with her own opinion on the issue until Thursday during her press conference, where she broke her silence and defended the measure.

Republicans and progressives have argued that despite Democrats’ claims that the bill will be paid for by the wealthy, the SALT measure will have the opposite effect. Because higher tax states usually have higher median incomes than other states, the benefits of the SALT deduction, critics say, will go mostly to the wealthy.

A study by the Institute on Tax and Economic Policy seems to vindicate this claim. The study quipped that the program is “not worth its SALT,” finding that the tax deduction would “overwhelmingly benefit wealthy, white households.”

“The vast majority of families would not benefit financially from repeal and most of the tax cuts would flow to families with incomes above $200,000,” the study says.

Asked about these criticisms, Pelosi responded, “As a supporter of that particular measure, I just want to clarify what that’s about.”

“It’s not about tax cuts for wealthy people,” Pelosi insisted, “it’s about services for the American people.”

Education, transportation, and healthcare state-level initiatives funded by state income taxes were “slashed by the Trump administration,” Pelosi said. “We’re just turning that over,” she added.

Pelosi continued, “This isn’t about who gets a tax break, it’s about which states get the revenue they need in order to meet the needs of the people.”

“That is a fight I will continue to make,” she vowed.

Unsatisfied with the response, a reporter pushed on the question, noting that whatever its other benefits, one result of reinstating SALT would be to give the wealthy a tax cut.

Other Democrats Say SALT Too Beneficial to Wealthy

Still, disagreements over SALT, as with so many other programs in the spending bill, continue to divide the Democratic caucus in both chambers.

In one plan introduced by the House Rules Committee, the SALT cap would be raised to $72,500, a more than sevenfold increase from its current level.

But moderate-leaning Sen. Bob Menendez (D-N.J.) and progressive Sen. Bernie Sanders (I-Vt.), both from high-tax northeastern states, criticized the plan, arguing with Republicans that it would overwhelmingly affect the rich.

While Sanders admitted that raising the cap to $72,500 is better than making no change at all, he said that the Rules Committee proposal “still is quite regressive.”

The unlikely moderate and progressive duo are instead working on a proposal that would leave the SALT capped at $10,000, but would give an exemption to taxpayers making under approximately $400,000.

According to Menendez, this alternate proposal would exempt around 98 percent of New Jersey constituents from the cap entirely.

And despite Pelosi’s emphatic support for the program, some progressives in the 95-strong progressive caucus agree with Sanders that the budget should not include provisions that would mostly benefit the wealthy, as analysis shows an increased SALT cap would.

Talks over the SALT cap continue, and it is not yet clear what the program will look like in the final draft of the bill.