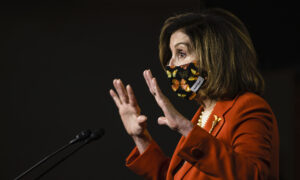 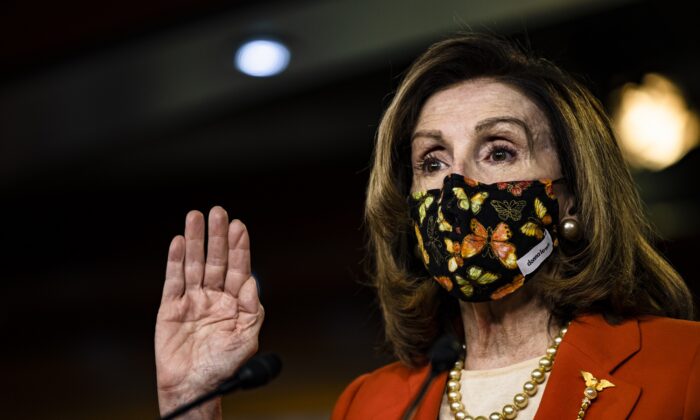 House Speaker Nancy Pelosi (D-Calif.) said Thursday that a proposed commission to investigate the Jan. 6 breach of the U.S. Capitol should have subpoena power.

During her weekly news conference, Pelosi was asked if the commission, supposedly modeled after the one established by President George W. Bush to examine the 9/11 terrorist attacks on New York City and the Pentagon, should be able to demand testimony from unwilling witnesses.

“You have to have subpoena power,” Pelosi replied, adding that there is “strong support in the country” for the congressional effort to “find the truth” behind what she described as “domestic terrorism.”

Following a failed attempt to link President Donald Trump’s speech with the violence occurred in the nation’s capital, Pelosi announced in her Feb. 15 letter to lawmakers that there will be an “outside, independent” commission to probe the incident.

The commission, she said, will “investigate and report on the facts and causes” of the breach, the “interference with the peaceful transfer of power,” as well as the “preparedness and response of the United States Capitol Police and other Federal, State, and local law enforcement in the National Capitol Region.”

However, there are concerns that the probe will be yet another partisan effort against Republicans. Rep. Rodney Davis (R-Ill.), a ranking member of the House Appropriations Committee, told CNN on Wednesday that he had yet to hear from Pelosi or anyone else in Democratic leadership about the structure of the commission.

“If Speaker Pelosi’s vision of a 9/11 Commission is to only stay focused on Republicans, then she is really not interested in a truly 9/11-type commission,” Davis said.

Prior to Pelosi’s letter to colleagues, four House Republicans sent a letter to the Speaker, questioning her role in a denied request by Capitol Police for National Guard support before and during unrest around the Capitol building.

“Five weeks have passed since the January 6th attack on the Capitol building, and many important questions about your responsibility for the security of the Capitol remain unanswered,” reads the letter signed by Reps. Davis, Jim Jordan (R-Ohio), James Comer (R-Tenn.), and Devin Nunes (R-Calif.). “As you are aware, the Speaker of the House is not only the leader of the majority party, but also has enormous institutional responsibilities. The Speaker is responsible for all operational decisions made within the House.”