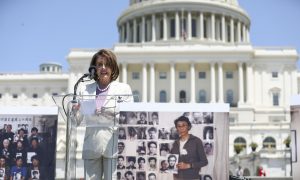 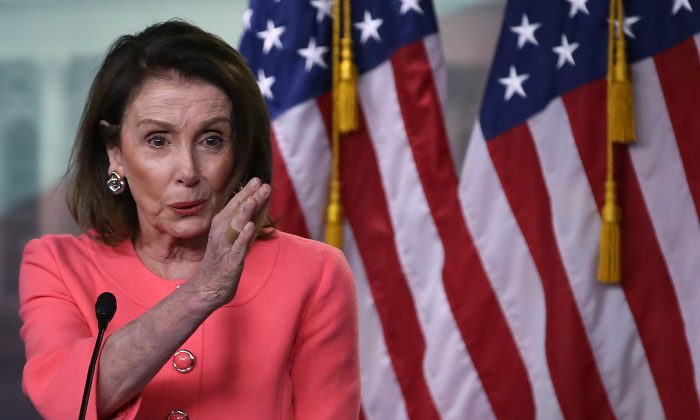 Pelosi Responds to US–Mexico Immigration Deal: ‘We Are Deeply Disappointed’

WASHINGTON—House Speaker Nancy Pelosi (D-Calif.) responded to the June 8 announcement that the United States and Mexico had reached an agreement on immigration, saying, “We are deeply disappointed by the administration’s expansion of its failed Remain-in-Mexico policy.”

The “Remain in Mexico” policy, also referred to as the Migrant Protection Protocols (MPP), means that those seeking asylum in the United States will wait in Mexico while their claims are adjudicated.

“The United States commits to work to accelerate the adjudication of asylum claims and to conclude removal proceedings as expeditiously as possible,” a joint declaration on the agreement states.

Pelosi also threatened that Congress would “hold the Trump administration accountable” for not addressing the humanitarian crisis at the border, an accusation Trump has repeatedly made of her party, including the week prior.

“The Democrats are doing nothing on the Border to address the Humanitarian and National Security Crisis! Could be fixed so easily if they would vote with Republicans to fix the loopholes,” he wrote in a June 2 tweet.

The Democrats are doing nothing on the Border to address the Humanitarian and National Security Crisis! Could be fixed so easily if they would vote with Republicans to fix the loopholes.

The president is likely referring to the Flores Settlement Agreement, which requires a child be released from Department of Homeland Security custody within 20 days, and the Trafficking Victims Protection Reauthorization Act, which prevents the U.S. government from returning children to non-contiguous countries.

Several members of Congress have drawn up bills to fix the legal loopholes that allow most children from Central America to stay in the United States indefinitely while immigration courts deal with a backlog of almost 900,000 cases.

Earlier this month, Customs and Border Protection released the number of migrants illegally crossing the border in May, showing at least a five-year high of 132,887.

“We need to work with Mexico on this problem,” Department of Homeland Security Acting Secretary Kevin McAleenan told The Hill in an interview published June 5.

He said that at any given time, there are 100,000 migrants transiting through Mexico on their way to the U.S. border.

In an interview with Fox News, published June 9, he said the threat of tariffs on Mexican goods had succeeded in getting Mexico’s attention and assistance.

“We’ve heard commitments before from Mexico to do more on their southern border. But the last time they deployed down there, it was about 400 or 500 officers. This is more than a 10-fold commitment to increase their security in Chiapas,” he said.

On May 30, Trump announced that unless Mexico did more to stem the flow of migrants from Central America, the United States would impose a 5 percent tariff on all goods from Mexico.

That tariff would increase by 5 percentage points every month through Oct. 1, at which point, it would remain at 25 percent “unless and until Mexico substantially stops the illegal inflow of aliens coming through its territory,” Trump said in a statement.

The announcement set off a four-day round of talks between the two countries that ended with the Mexican government agreeing to deploy its National Guard—focusing on its border with Guatemala—to curb the large numbers of migrants headed for the United States.

Mexico also agreed to do more to break up human smuggling and trafficking organizations.

The two countries agreed to cooperate more closely on things such as information-sharing to secure their shared border, and to work with regional partners to address the underlying causes of migration in Central American countries.

However, the agreement is still a work in progress. In the joint declaration, they said that if the measures they adopted didn’t have the “expected results,” both countries would take “further actions.”

The two sides will continue talks on the migration crisis, and agreed that if the theretofore-made agreement didn’t have the desired effect, they would announce the “terms of additional understandings” within 90 days.

…..Mexico was not being cooperative on the Border in things we had, or didn’t have, and now I have full confidence, especially after speaking to their President yesterday, that they will be very cooperative and want to get the job properly done. Importantly, some things…..

Trump hinted in a June 9 tweet that “some things” that hadn’t been put in the press release about the agreement would be announced at a later date.

“Importantly, some things not mentioned in yesterday’s press release, one in particular, were agreed upon. That will be announced at the appropriate time,” he wrote.