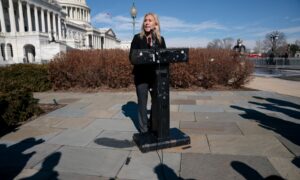 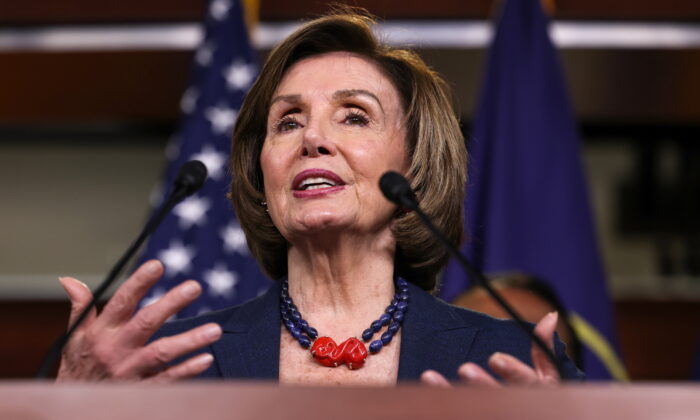 Speaker of the House Nancy Pelosi (D-Calif.) speaks at a news conference in the U.S. Capitol about the COVID-19 Hate Crimes Act, in Washington, on May 18, 2021. (Evelyn Hockstein/Reuters)
Congress

House Speaker Nancy Pelosi (D-Calif.) said she rejected two representatives that Leader Kevin McCarthy’s (R-Calif.) appointed to the January 6 Select Committee because of previous statements they made, adding that their membership on the committee would weaken the integrity of the commission.

“We’re there to get the truth, not to get Trump, t-r-u, truth. Trump, that seems to be what the other side is obsessed with,” said House Speaker Nancy Pelosi said during her daily press briefing at the Capitol on July 22. “So as legislation allows, I didn’t accept two of the five people were appointed as they had made statements and taken actions that I think would impact the integrity of the commission of the committee, the work of the committee.”

Pelosi rejected Rep. Jim Jordan (R-Ohio) and Jim Banks (R-Ind.) being on the Select Committee, saying they do not have sound judgment because of their relationship with former President Donald Trump.

“And the other two voted for [contesting electors during a joint session of Congress],” Pelosi said. “Having said that, though, the other two made statements and took actions that just made it ridiculous to put them on such a committee seeking the truth.”

She said their past statements “just make it impossible for them to exercise judgment, again this is about seeking the truth. And it’s about not I, as I said in my comment with respect for the integrity of the investigation with concern to the American people want to know the truth. And in light of statements and actions taken by them. I could not appoint them, I said that while this may be unprecedented. So, was an attack on the Capitol,” Pelosi continued.

The Speaker said she tried to work with the Republicans to have a bipartisan commission and meet GOP demands but ran into too much opposition. McCarthy told reporters Thursday that he opposed the formation of both the bipartisan and the select committee to investigate the Jan. 6 breach because it is politically motivated. He said the Speaker rejecting Jordan and Banks was also politically motivated.

“I don’t think anybody in America … understand what a sham this committee is and how politically driven [it is] for her to pick and choose who can serve on [the committee]. To say that the ranking member of the judiciary, who would have jurisdiction, cannot serve. When she decides that Jim banks who served his nation in the Navy and Afghanistan, that he can’t serve here,” said McCarthy.

The GOP leader also criticized the Speaker’s choice for Chair of the Select Committee, Rep. Bennie Thompson (D-Miss.), saying he has a strong bias against Republicans.

“When she selects a chair of the committee that believes Republican senators are equal to terrorists, just dropped a lawsuit against the president, and objected to the electors when it came to the election of George Bush,” McCarthy said of Thompson.

The Democrat-controlled House passed legislation to create the select committee, which Pelosi said will have a quorum, and investigate the causes of events on Jan. 6, how it was organized, who paid for it, and who messaged to get those people here for what she called an “assault” on the Capitol.