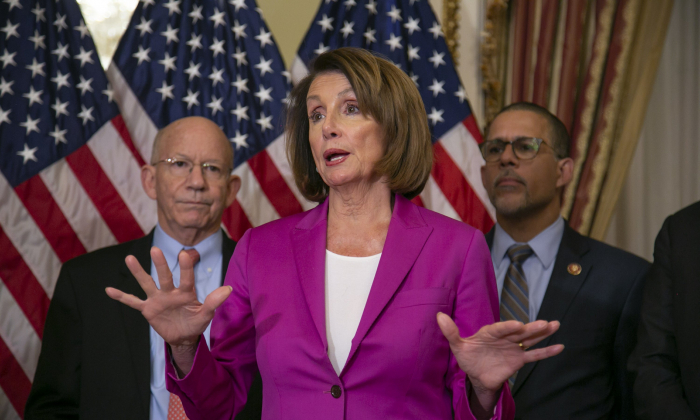 Speaker of the House Nancy Pelosi (D-Calif.) at the Capitol in Washington, on Jan. 11, 2019. (J. Scott Applewhite/AP)
Politics

House Speaker Nancy Pelosi (D-Calif.) told fellow Democrats on March 23 that she will reject a classified briefing on the contents of the report on the Russia investigation by special counsel Robert Mueller, according to a person familiar with the discussion.

Pelosi told 120 House Democrats on a conference call that she would decline any classified briefing on the report, in favor of an unclassified briefing that would allow lawmakers to discuss the details publicly. Pelosi also called Attorney General William Barr’s offer to provide Congress with a summary of the findings “insufficient.”

Several committee chairmen on the same call also pushed for the release of the full report and underlying documents.

Barr announced on March 22 that Mueller had submitted the full report on the special counsel investigation. The announcement marked the end of Mueller’s nearly two-year investigation into allegations of conspiracy between Trump campaign associates and Russia. Mueller didn’t charge anyone for conspiring with Russia. Barr’s statement specified that the special counsel plans no additional indictments.

Congressional Democrats are calling for the full report to be made public. Pelosi urged Barr not to provide Trump with a “sneak preview” of the report.

“Barr must not give President Trump, his lawyers or his staff any ‘sneak preview’ of Special Counsel Mueller’s findings or evidence, & the White House must not be allowed to interfere in decisions about what parts of those findings or evidence are made public,” Pelosi wrote on Twitter on March 22.

White House spokesman Hogan Gidley confirmed that the White House hadn’t received or been briefed on the Mueller report as of the morning of March 24. President Donald Trump has said that the report should be released to the public.

“The next steps are up to Attorney General Barr, and we look forward to the process taking its course,” White House press secretary Sarah Sanders wrote on Twitter.

“The attorney general has said he intends to provide as much information as possible. As I have said previously, I sincerely hope he will do so as soon as he can, and with as much openness and transparency as possible,” McConnell said in a statement.

The special counsel investigation has stoked an unprecedented media frenzy, with liberal pundits prognosticating that the investigation will result in the impeachment of Trump and prison time for his family members. Mueller concluded his investigation with no new indictments, dashing those predictions.

The special counsel brought charges against 34 people and three companies during his investigation, with prison sentences for some of Trump’s former aides, such as campaign chairman Paul Manafort and longtime personal lawyer Michael Cohen.

None of those charges, however, directly relate to whether Trump’s campaign worked with Moscow. Mueller, a former FBI director, didn’t interview Trump in person for his probe. Instead, Trump sent written answers to some questions about contacts with Russia.

Like the special counsel, two congressional investigations also have concluded that there is no evidence of collusion between the Trump campaign and Russia.

According to multiple reports, Barr intends to make the key findings of the report available to Congress by the end of the day on March 24.

Trump hasn’t commented on the conclusion of Mueller’s investigation. On March 24, the president sent a pair of messages on Twitter with no mention of the report.