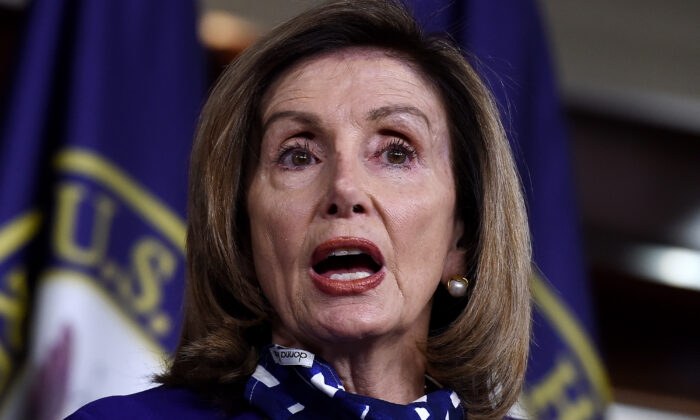 On Oct. 1, the speaker told reporters that she is preparing the House for a possible role in determining the winner with a vote by each state’s delegation. “We have all sorts of opportunities,” she said.

If a majority doesn’t emerge for either of the two candidates, Pelosi said, “then it goes into another range where the speaker becomes the [president],” referring to herself.

“It’s complicated after that,” she said.

About 150 years ago, the House played a role in determining the outcome of a presidential election. A 269–269 Electoral College tie or another dispute that prevents the determination of a clear winner would result in a contingent election, according to the 12th Amendment.

“I think it’s 26 to 22 or something because it’s counted one vote per state, so we actually have an advantage.”

At her news conference, Pelosi said, “As you may recall, I’ve said … that we will be ready,” adding that there are a number of scenarios that could emerge.

Pelosi made reference to the contested election scenario earlier this week.

“Anything we do to increase our numbers in the House, whether it’s state delegations or members of Congress wherever they are, will help us hold the House and enlarge our size, win the Senate and elect Joe Biden president of the United States on Election Day—or the few days that it takes to count thereafter,” she said in an interview.

In the interview, she confirmed sending a letter to House Democrats to shift funding to battleground districts.

The Constitution requires Congress to certify the Electoral College vote total on Jan. 6, 2021.

Congress hasn’t been used to intervene in a presidential election since 1877.