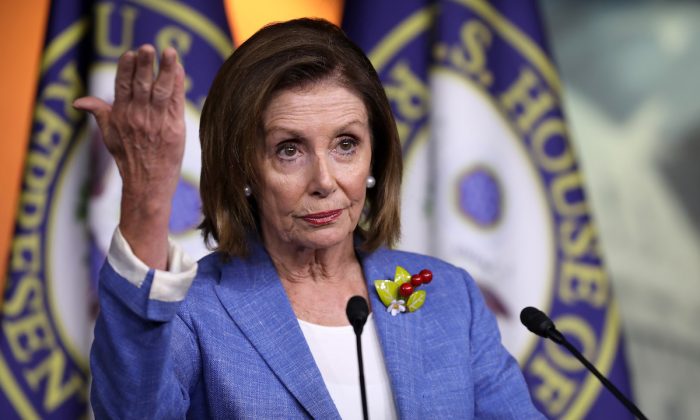 House Speaker Nancy Pelosi (D-Calif.) and Rep. Alexandria Ocasio-Cortez (D-N.Y.) held a closed-door meeting on July 26 in a bid to resolve their differences and recent tensions between moderate and progressive lawmakers in the Democratic Party.

Pelosi confirmed the meeting in a post on Twitter, saying that the two lawmakers “sat down to discuss working together to meet the needs of our districts and our country, fairness in our economy and diversity in our country.”

Today, Congresswoman @RepAOC and I sat down to discuss working together to meet the needs of our districts and our country, fairness in our economy and diversity in our country. pic.twitter.com/eVp1LS0Gpw

During a press conference later in the day, Pelosi said the meeting went “very well” and pushed back at suggestions that the meeting was meant to “bury the hatchet,” as she tried to downplay the tensions.

“I don’t think there was ever any hatchet,” she said. “We are in the political arena.”

“We are the Democratic party. Ever since I came here, we have been engaged in differences in opinion in our caucus and that is a good thing,” she said.

Pelosi then described the feud as family differences, “It’s like you’re in a family. In a family, you have your differences, but you’re still a family. Does your family always agree on everything?”

Ocasio-Cortez described the meeting as “positive” and “productive,” adding that she looks forward to working with Pelosi.

“I think the speaker respects the fact that we’re coming together as a party,” she told reporters after the meeting.

The bill was introduced to address the humanitarian crisis at the southern border. Pelosi decided to back down on efforts to amend the bill at the time because of intense pressure to approve it before the July 4 recess.

Earlier this month, Pelosi told The New York Times that the four members’ style of leadership lacked the influence needed to build a following.

“All these people have their public whatever and their Twitter world,” she said. “But they didn’t have any following. They’re four people and that’s how many votes they got.”

Ocasio-Cortez responded by accusing Pelosi of repeatedly singling out newly elected women of color and described the action as “outright disrespectful.”

“When these comments first started, I kind of thought that she was keeping the progressive flank at more of an arm’s distance in order to protect more moderate members, which I understood,” Ocasio-Cortez told The Washington Post.

“But the persistent singling out … it got to a point where it was just outright disrespectful … the explicit singling out of newly elected women of color,” she added.

The squabble was effectively put on hold after President Donald Trump criticized “the squad” in a series of Twitter posts, accusing them of spreading anti-semitic and anti-American rhetoric.

Reacting to the news of the closed-door meeting, Ronna McDaniel, the Chair of the Republican National Committee, wrote on Twitter: “AOC has completely taken over the Democrat Party. Pelosi said it herself: ‘I don’t think we have that many differences.'”

AOC has completely taken over the Democrat Party.

Pelosi said it herself: “I don’t think we have that many differences.” https://t.co/6kWUkz0Yvh

Nicholas Giordano, a professor of political science and host of The PAS Report Podcast, said Ocasio-Cortez and “the squad” have managed “to hijack the party.”

“It’s interesting that the current face of the party has become “the squad,” but if we look at the results of the 2018 midterm elections, it was the pragmatic candidates campaigning on the idea of working on a bipartisan basis that won the Democrats the majority,” he told The Epoch Times in an email on July 26.

“The four women of the squad have managed to hijack the party, and Republicans love nothing more than portraying them as the face of the party. What strikes me as odd is the fear centrist and blue-dog Democrats have in standing up to the squad,” he continued.

“There are many Democrats whom I’ve spoken with that are horrified where the party is going, yet they are afraid to speak out because they don’t want to be savaged by the liberal activists, the media, and the progressive twitter world. Right now, no leadership exists in the party so essentially these four are controlling the narrative.”

Giordano described the public feud between Pelosi and Ocasio-Cortez as a “power struggle within the Democrat party.”

“On one side, you have Speaker Pelosi who has the political power. On the other, you have Congresswomen AOC who has the public power. It is clear that the two do not like one another, but Speaker Pelosi has the harder job as she has to present a unified front amongst Democrats. She also has to project her power as Speaker as a freshman Congresswoman challenges her authority,” Giordano said.

He added that Pelosi is currently “trying to walk a fine line” in order to not offend people who support the progressive members of the party, but is trying to get things done in Congress.

“She understands the enormous following people like Congresswomen AOC have. At the same time, she understands that in order to get things done in Congress, you must take a pragmatic approach,” he said. “Speaker Pelosi knows the game and knows it is unrealistic to impeach the President or to push through legislation like the Green New Deal. But, she is worried about the backlash if she attempts to be too hard on the progressive wing.”

As for Trump, Giordano said he thinks that as long as “the squad” is seen as the face of the Democrat party, it would benefit the president.

“While some may not like the President’s personality, they really don’t like members of Congress constantly bashing the United States, comparing law enforcement officers to thugs and Nazi’s, and saying the U.S. is running concentration camps,” he said.

“I believe the constant denigrating of the United States will lead to President Trump gaining more independent voters that may not like President Trump’s personality but are more fearful of the squad pulling the Democrat party to the extreme left,” he added.