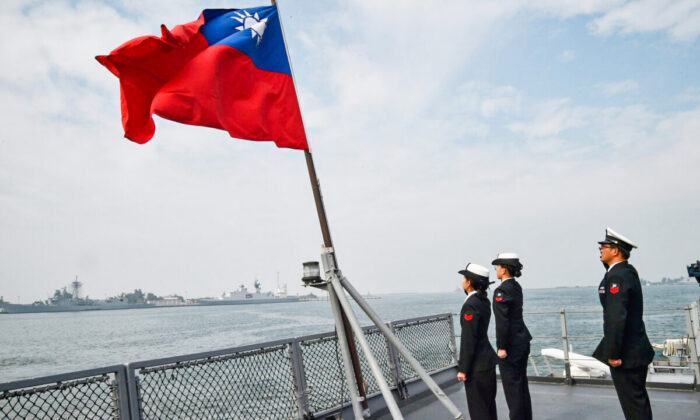 Taiwanese sailors salute the island's flag on the deck of the Panshih supply ship after taking part in annual drills, at the Tsoying naval base in Kaohsiung on Jan. 31, 2018. (Mandy Cheng/AFP via Getty Images)
Threat from Communist China

President Joe Biden has faced backlash from within the government after he cited the view of his military’ advisers that U.S. House of Representatives Speaker Nancy Pelosi’s reported visit to Taiwan was “not a good idea.” Despite the Chinese communist regime sending out more threats against Pelosi’s planned trip, experts believe she is more likely to go than back down.

The Financial Times reported on July 19 that Pelosi would lead a delegation to visit Taiwan in August, which would be the first trip by a Speaker of the U.S. House of Representatives to the self-ruled island in 25 years.

The report sparked a strong reaction from Beijing, with Chinese Foreign Ministry spokesman Zhao Lijian saying that a visit by Pelosi would seriously violate Beijing’s “One China principle”—which differs from the United States’ “One China Policy”—and “send a seriously wrong signal to Taiwan independence forces.”

Zhao also said that such a visit would “severely undermine China’s sovereignty and territorial integrity” and will “have a severe negative impact on Sino-U.S. relations,” noting that China would “take resolute and strong measures.”

Hu Xijin, former editor-in-chief of the media mouthpiece of the mainland’s communist regime “Global Times,” suggested that the Chinese authorities should send special fighter jets to “accompany” Pelosi when she visits Taiwan to show the sovereignty of mainland China over Taiwan.

The Chinese communist regime on the mainland has claimed sovereignty over the self-ruled liberal democratic island, which it has never governed. The regime has recently increased its threats of “unifying” Taiwan by military force.

Following the Chinese regime’s threats, Biden said on July 20 when asked by reporters about the possible Pelosi Taiwan visit, “I think that the military thinks it’s not a good idea right now.”

Pelosi responded to Biden’s remarks at her weekly press briefing on July 21, saying, “I think what the President is saying is that maybe the military was afraid our plane would get shot down or something like that by the Chinese. I don’t know exactly. I didn’t see it, I didn’t hear it. You’re telling me, and I’ve heard it anecdotally, but I haven’t heard it from the president.”

She would not discuss the travel plans further for security reasons.

She also said, “It’s important for us to show support for Taiwan. None of us have ever said we’re for independence when it comes to Taiwan. That’s up to Taiwan to decide.”

Regarding Biden’s comments, former U.S. Defense Secretary Mark Esper, who was visiting Taiwan, told reporters in Taipei on July 21, “I don’t think we should allow China to dictate the travel schedules of American officials.”

“I think it’s important that American political leaders visit Taiwan, understand the situation here, have a chance to meet with Taiwan’s political leadership, and get a better sense of what’s happening and how things are viewed from here in Taipei, less than 110 miles from the [Chinese] ‘mainland,’ and get to make their own assessment,” he said.

“And the simple fact that we’re worried about what China may or may not do with regard to the speaker of the House visiting is a case in point that we need to relook [at] our policy,” he said.

Biden’s remarks were received by some in the U.S. media as showing a weak stance toward the Chinese regime.

On July 21, China’s Foreign Ministry spokesman Wang Wenbin sent out an escalated warning: “Should the U.S. side insist on making the visit, China will act strongly to resolutely respond to it and take countermeasures. We mean what we say.”

The comment sparked concerns of possible military action by the regime.

Reflection of US Public Opinion

Cheng Chin-mo, director of the Department of Foreign Affairs and International Relations at Tamkang University in Taiwan, pointed out that Taiwan is important in the geopolitics of the Asia-Pacific.

“Although the Chinese regime is making threats to prevent Pelosi from visiting Taiwan, the Democratic Party is facing the pressure of mid-term elections. Her visit is to show support to Taiwan, a strong position in the U.S.-Sino relations, and the overall dominance of the Western Pacific. Because public opinion in the United States is still dominated by anti-communism. As a democratic country, the Unites States must take public opinion into consideration after all. Pelosi’s visit to Taiwan is helpful for the Democratic Party’s election.”

Su Tzu-yun, director of the Institute for Strategic and Development Studies in Taiwan, said that Pelosi is a female leader with her own independent judgment, and a history of close support for democracy and opposing the Chinese Communist Party (CCP), adding that he believed she would most likely visit Taiwan as planned.

“The only variable is that because she and Biden belong to the same Democratic Party, she might coordinate with Biden and then postpone her visit. It’s possible. However, under the current general environment, especially the atmosphere of anti-authoritarianism, in the international community, as well as the midterm elections in the United States, it is impossible to show weakness [toward the CCP] anymore. Pelosi is more likely to make the visit to Taiwan than postponing or canceling it,” he said.

Su added that the Taiwanese government welcomes Pelosi’s visit, as it means a strong relationship between Taiwan and the United States.

He emphasized, “Pelosi’s visit to Taiwan is to support Taiwan’s democratic system and oppose dictatorship. This is a completely different concept from the CCP’s so-called ‘sending a seriously wrong signal to Taiwan independence forces’.”

The Epoch Times reached out to both Nancy Pelosi’s office and the White House for comment but has yet to hear back.