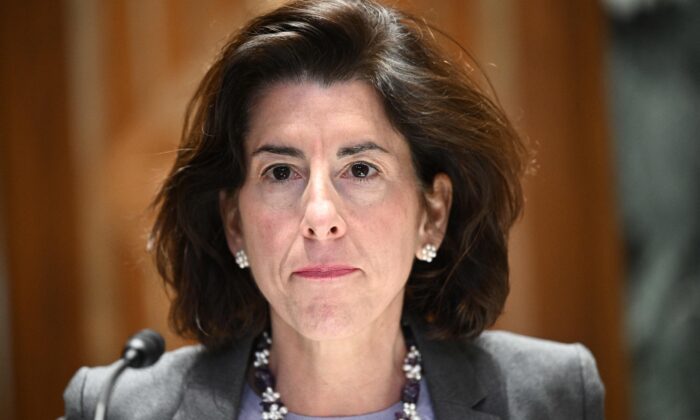 “Certainly, it has made it a little more challenging,” Raimondo said during an Aug. 10 interview with Bloomberg. “It’s harder, but I am hopeful that we will get beyond that and get back to a place where we can have more of those discussions.

“But, I know he’s looking at it. We’ve talked about it again recently, and I expect he’ll be making a decision before too long.”

Pelosi’s visit to Taiwan was used as a pretext by China’s communist regime to launch a series of escalatory military drills in the Indo-Pacific, which drew international outrage and condemnation. The incident brought the already fraught Sino–American relationship to its lowest point in decades.

According to Raimondo, it also means that Biden can’t now undo some of the Trump-era policies intended to punish China for its rampant theft of U.S. technologies.

Biden has been exploring the possibility of ending some tariffs raised on Chinese goods by former President Donald Trump. However, U.S. trade representatives have cautioned against the move, saying that it would needlessly give up a piece of negotiating leverage to China.

Trump imposed tariffs on roughly $300 billion in Chinese imports in 2018. The move was a response to a federal investigation that concluded that China’s communist regime had stolen intellectual property from U.S. companies as part of a systematic effort to force technology transfer between the two nations.

Now Biden is considering the removal of some of the tariffs—ranging from microchips to t-shirts—to combat the record inflation that has become a hallmark of his presidency. By getting rid of the tariffs, the administration hopes to reduce the cost of living for U.S. families by pouring cheap Chinese goods into the market.

The administration hasn’t indicated which specific duties it may remove. Raimondo said Biden is still considering what to do with the tariffs and that he’s “very cautious” about weighing his options.

Raimondo previously came under fire for her family’s financial interests in China. Her husband, Andy Moffit, is a top executive and strategic adviser at a tech company funded partially by venture capital linked to the Chinese Communist Party (CCP). She and her husband also personally own a financial stake in Tencent, the parent company of WeChat, a social media platform used by the CCP to monitor and collect personal data from international users.

Trump banned WeChat from the United States in 2020, citing national security concerns. But Biden revoked the ban in 2021 and gave Raimondo’s department control over investigating the platform.