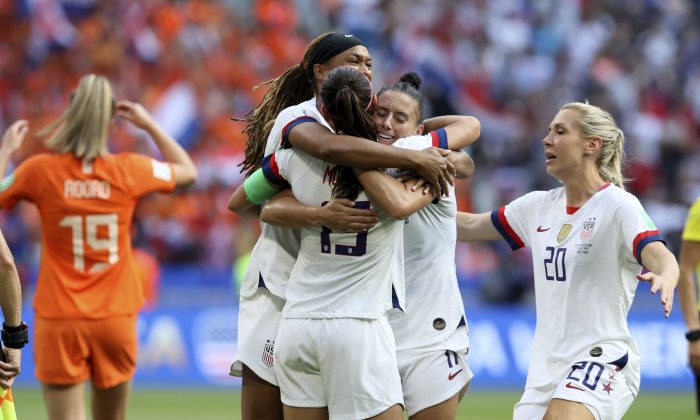 U.S. players celebrate at the end of the Women's World Cup final soccer match between the U.S. and the Netherlands at the Stade de Lyon in Decines, outside Lyon, France, on July 7, 2019. (David Vincent/AP Photo)
Politics

House Speaker Nancy Pelosi (D-Calif.) has invited the U.S. women’s soccer team to the capitol following their victory over the Netherlands in the World Cup final.

Pelosi praised the team for their “strength, unity, and patriotism” and extended an invitation together with Rep. Kathy Castor (D-Fla.) and Rep. Darin LaHood (R-Ill.) to the team to visit the U.S. Capitol as a team or individually.

“Congrats to @uswnt for winning w/ strength, unity & patriotism. By popular, bipartisan demand & with @USRepKCastor & @RepLaHood, co-chairs of Soccer Caucus, I’m pleased to invite the players to the US Capitol as a team or individually to celebrate your inspiring victory,” Pelosi wrote.

Congrats to @uswnt for winning w/ strength, unity & patriotism. By popular, bipartisan demand & with @USRepKCastor & @RepLaHood, co-chairs of Soccer Caucus, I’m pleased to invite the players to the US Capitol as a team or individually to celebrate your inspiring victory. ⭐⭐⭐⭐

LaHood, who is a co-chair of the Soccer Caucus shared a similar message. He said, “I am proud to invite the [USWNT] to the US Capitol to honor them and their dominant World Cup performance.”

As a co-chair of the bipartisan Soccer Caucus, I am proud to invite the @USWNT to the US Capitol to honor them and their dominant World Cup performance. #BackToBack #OneNationOneTeam ⭐⭐⭐⭐ https://t.co/YdgObd8dP5

“That’s an incredible achievement. It was a very exciting game. I got to see a little bit of it. And they’re great players, and it’s a great honor to have them capture it for the United States—fourth time—and that’s a tremendous thing. So congratulations to the team on the World Cup,” Trump told reporters before boarding Air Force One in New Jersey.

Congratulations to the U.S. Women’s Soccer Team on winning the World Cup! Great and exciting play. America is proud of you all!

When asked whether he would invite the team to the White House, Trump said: “We haven’t really thought about it. We will look at that, certainly.”

“Congratulations to 2019 Women’s World Cup Champions,” she wrote on Twitter.

The women’s soccer team co-captain Megan Rapinoe has recently been making headlines for her overt political stance. She garnered extensive attention after she said she would not visit the White House if her team won the World Cup and sparked a public feud with the president.

Responding to the comments, Trump took the opportunity to admonish the soccer star for conduct that he believes disrespects the White House, the flag, and the country.

“Women’s soccer player, @mPinoe, just stated that she is ‘not going to the [expletive] White House if we win.’ Other than the NBA, which now refuses to call owners, owners (please explain that I just got Criminal Justice Reform passed, Black unemployment is at the lowest level in our Country’s history, and the poverty index is also best number EVER), leagues and teams love coming to the White House,” Trump said. “I am a big fan of the American Team, and Women’s Soccer, but Megan should WIN first before she TALKS! Finish the job!”

Rapinoe is openly critical of the president and was criticized after she refused to sing the “The Star-Spangled Banner” before the team’s first World Cup match against Thailand on June 11. She also received backlash for becoming the first white athlete to kneel during the anthem in 2016, in support of NFL quarterback Colin Kaepernick, who started kneeling during the anthem to protest against perceived racism and inequality by law enforcement toward African Americans.

Trump described her protest as not appropriate in an interview with The Hill.

Along with Pelosi, Rep. Alexandria Ocasio-Cortez (D-N.Y.) has also invited the soccer co-captain to tour Capitol Hill at any time the team wishes late June, which was promptly accepted by Rapinoe.

The team also came under fire after midfielder Allie Long briefly dropped the U.S. flag onto the ground in order to do a victory dance with Rapinoe, who had won the Golden Boot trophy.

@ALLIE_LONG I understand the excitement of the moment, but please NEVER disrespect the 🇺🇸 flag by dropping it on the ground! pic.twitter.com/OdPJqAP6r4

I think it’s GREAT the woman’s soccer team won but don’t disrespect the American Flag by dragging it on the ground and dropping it just to take a picture. WAY too many damn men and women died to protect what that flag stands for.

Meanwhile, another team member, Kelley O’Hara, was praised after she was seen quickly running in to pick up the flag.

@ALLIE_LONG with the #fail and @kelleymohara with the American Flag save!

For real though, @kelleymohara
is the HERO of the World Cup! For the record I doubt @ALLIE_LONG had bad intentions, just lacked some situational awareness in the moment…
Kelley O’Hara RESCUES the American flag after teammate drops it during victory dance https://t.co/2t1DFRYIaY