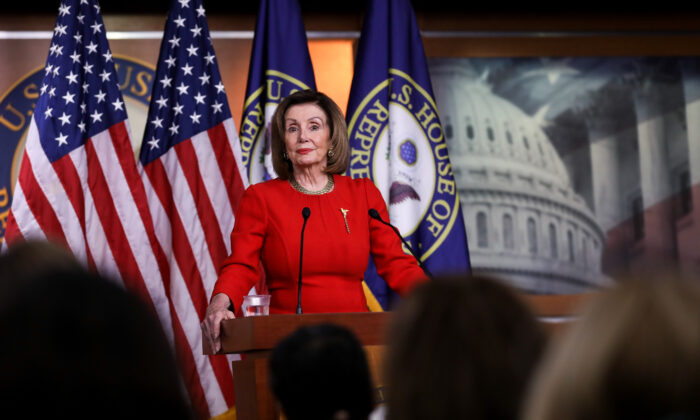 A House Democrat tactic of delaying the sending the two articles of impeachment against President Donald Trump achieved a “positive result,” according to House Speaker Nancy Pelosi (D-Calif.)

“It’s a positive result in terms of additional emails and un-redacted information that has come forward, that [former White House adviser John] Bolton has said that he would testify if subpoenaed by the Senate, other information that has come forward. And more importantly, raising the profile of the fact that we need to have witnesses and documentation” in the trial, she remarked on ABC News’ “This Week.”

Last week, Pelosi wrote to her Democratic colleagues in the House that she intends on sending the articles of impeachment to the Senate for the trial in the next week.

She elaborated on the development in the ABC interview: “I would be consulting with my members this week, on Tuesday morning, at our regular caucus meeting, that we would vote to send them over, and we will determine in our meeting when we send them over.”

“I have always said I would send them over. So there shouldn’t be any mystery to that,” Pelosi said. “What we did want, though, and we think we accomplished in the past few weeks, is that we wanted the public to see the need for witnesses—witnesses with firsthand knowledge of what happened—documentation, which the president has prevented from coming to the Congress as we review this.”

The move comes after Senate Majority Leader Mitch McConnell (R-Ky.) told reporters he has secured enough votes to start the impeachment trial under the rules he would like.

“We have the votes, once the impeachment trial has begun, to pass a resolution essentially the same—very similar—to the 100-to-nothing vote in the Clinton trial, which sets up, as you may recall, what could best be described as maybe a phase one,” McConnell told reporters last week.

To add more pressure on the Democrats in the House, the majority leader signed onto a resolution introduced by Sen. Josh Hawley (R-Mo.) that would allow the Senate to dismiss articles of impeachment if they are not transmitted within 25 days of the vote, which took place Dec. 18.

During a closed-door meeting, McConnell also reportedly told other senators that he expects the trial to start in the coming week, according to GOP senators who were there.

“[McConnell] expects them at some point here very soon,” said Sen. Marco Rubio (R-Fla.) on Thursday, according to a report from Politico. “The sense is that even if they got here at this very moment right now, there’s still a process involved to notify the White House and chief justice and turning it all around … I’m not sure he has any specific knowledge, but the gut feeling is that it will come over there tomorrow and set up for a Monday start.”

Democrats had sought to force a split between at least four Republicans and McConnell to vote on calling up impeachment witnesses before the trial rules were set. However, McConnell wanted to follow the precedent set during the 1999 trial of President Bill Clinton.