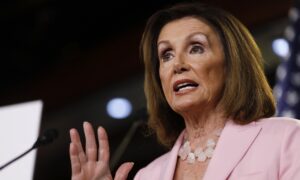 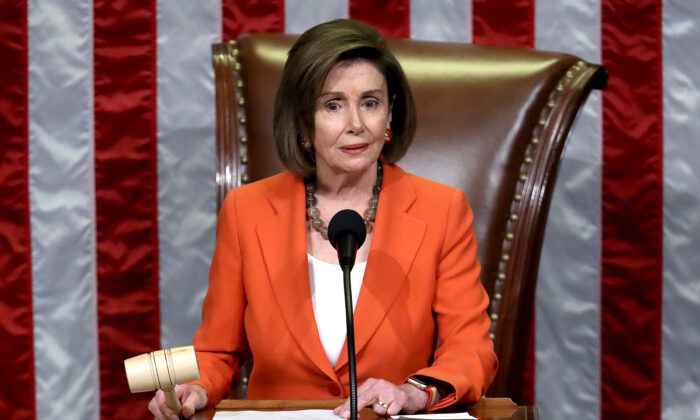 House Speaker Nancy Pelosi (D-Calif.) gavels the close of a vote by the House of Representatives on a resolution formalizing the impeachment inquiry centered on President Donald Trump in Washington on Oct. 31, 2019. (Win McNamee/Getty Images)
Politics

Expect public impeachment inquiry hearings to start sometime in November, said House Speaker Nancy Pelosi (D-Calif.) in a statement to reporters, insisting there is no deadline.

“I would assume there would be [a] public hearing in November,” Pelosi told Bloomberg News reporters and editors in a closed-door meeting, reported by the news wire service on Friday morning.

She said the case to impeach President Donald Trump “has to be ironclad”—her comments coming a day after the House voted along partisan lines on a resolution to set up a formal process for public hearings and testimonials on the impeachment inquiry. Democrats have accused President Donald Trump of abusing the power of his office by exerting pressure on Ukraine to investigate Joe Biden and his son, Hunter, which Trump has categorically denied.

“I don’t know what the timetable will be—the truth will set us free,” Pelosi said. “We have not made any decisions on if the president will be impeached.”

Republican lawmakers and the Trump administration have criticized the Democrats for carrying out a politically motivated impeachment process, which, they have argued, isn’t what the powers of impeachment were for when they were created by the Founding Fathers. Some have said the Democrats are still upset over Trump’s stunning 2016 election victory and are working to derail his reelection campaign.

Should the House take up a vote on impeachment, it would then be passed to the Senate, where a more-than two-thirds majority is needed to convict the president. Most Republican Senators have signaled they won’t vote to convict Trump, making the outcome highly unlikely.

Meanwhile, White House press secretary Stephanie Grisham said on Friday morning that the Trump administration expects that the president will be impeached.

“We are still obviously hopeful everybody will come to their senses and realize the president did nothing wrong. But we are prepared for an impeachment to happen,” Grisham told Fox News.

“Nancy Pelosi has made it very very clear the House Democrats are going to vote. Starting from the beginning with all of their closed-door meetings and the way they have had their selective leaks with witnesses this has been set up to impeach the president. It is something we’re expecting,” she added.

Regarding the House voting to impeach Trump, “I wouldn’t say it’s a foregone conclusion, but we’re expecting it, yes,” Grisham said.

Pelosi, in public comments, has vehemently defended Thursday’s partisan vote to initiate the investigation. However, she has said the vote is not necessary.

The House voted 232-196 for a resolution setting out rules for the impeachment process, and two Democrats, Reps. Collin Peterson (Minn.) and Jeff Van Drew (N.J.), voted against the measure.