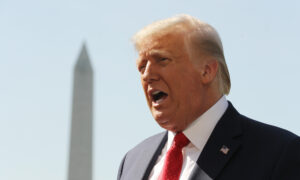 “Your abrupt decision to cancel previously scheduled election-related briefings, contrary to repeated private and public commitments by the Office of the Director of National Intelligence (ODNI), is an abdication of your responsibility to keep the American people and their elected representatives informed of foreign threats to the 2020 election,” they wrote in a letter on Tuesday.

“If you are unwilling to resume election-related intelligence briefings to Congress, we will have no choice but to consider the full range of tools available to compel compliance,” they continued.

The ODNI did not immediately respond to The Epoch Times’ request for comment.

In late August, Ratcliffe told the House and Senate intelligence committees that the ODNI will still provide written briefings on election security matters. Ratcliffe, in letters to the panels, said that leaks from members of Congress were a primary reason for the change.

Ratcliffe said on Fox News that he had been frequently briefing “not just the oversight committees but every member of Congress.” But, he said, “within minutes of one of those briefings ending, a number of members of Congress went to a number of different outlets and leaked classified information for political purposes.”

But the Democrats argued in their letter that “written finished intelligence products are no substitute for intelligence briefings” and insisted that Russia is the major threat to the November elections.

‘The IC (Intelligence Community) confirmed publicly on August 7 that only one country—Russia—is actively undertaking a “range of measures” to interfere in the election, they said, adding, “Your decision, moreover, comes as the Congress itself is the target of a concerted effort by Russia to launder and amplify disinformation, including through a ‘pro-Russia Ukrainian parliamentarian’ who is spreading false claims ‘to undermine former Vice President Biden’s candidacy and the Democratic Party.'”