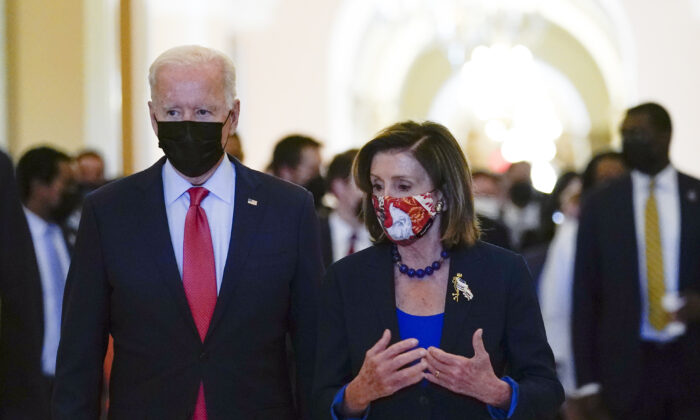 House Speaker Nancy Pelosi (D-Calif.) on Friday delayed a vote on a Senate-passed infrastructure bill, drawing criticism from some members of her party.

So-called progressives and moderates within the caucus are battling over a $3.5 trillion budget proposal. The Congressional Progressive Caucus, a bloc of nearly 100 House members, doesn’t want to pass infrastructure without the lower chamber first passing the mammoth budget piece, but moderates say the proposals should be considered separately and have urged a vote on the infrastructure bill.

Pelosi, who had already delayed the vote at least once, told members late Friday that “great progress has been made” in intra-party negotiations.

But “more time is needed,” she added in a note. “Our chairs are still working for clarity and consensus. Clearly, the bipartisan infrastructure bill will pass once we have agreement on the reconciliation bill.”

Some members went public with criticism of Pelosi over the delay, noting she promised to hold a vote by a certain date.

“It’s deeply regrettable that Speaker Pelosi breached her firm, public commitment to Members of Congress and the American people to hold a vote and to pass the once-in-a-century bipartisan infrastructure bill on or before September 27,” Rep. Josh Gottheimer (D-N.J.), co-chair of the bipartisan Problem Solvers Caucus, said in a statement.

Gottheimer took a swipe at the progressives, describing them as a “small faction on the far-left” and arguing that House leadership should not let them “obstruct” advancement of the infrastructure package.

“They’ve put civility and bipartisan governing at risk,” he said.

Rep. Stephanie Murphy (D-Fla.), a member of the caucus, said she was “disappointed and disillusioned by this process” and also referenced how Pelosi pledged the infrastructure bill would be considered by Sept. 27.

The tactics have befuddled Sen. Joe Manchin (D-W.Va.), a moderate who has repeatedly said he won’t support such a large budget piece after the trillions Congress has approved for COVID-19 relief and other measures in the past 18 months.

Because Democrats hold slim majorities in both legislative chambers, any group in the House or a single senator that opposes a bill threatens to doom its chances, particularly if Republicans also oppose it. The GOP unilaterally opposes the budget piece while some members have said they’d vote for infrastructure. In the Senate, 19 Republicans joined with Democrats to pass the bill in August.

President Joe Biden is siding with the progressives, putting pressure on Pelosi and other Democrats to continue to link the two bills and to reach an agreement on the $3.5 trillion package before voting on infrastructure.

Biden went to Capitol Hill on Friday to meet with Democrats to try to break the logjam.

“He was really clear that we need to get both bills done, and that’s what we’re going to do,” Rep. Primalaya Japayal (D-Wash.), chair of the progressive caucus, told reporters on Capitol Hill.

Biden acknowledged in meetings that the $3.5 trillion price tag would likely need to come down to garner more support from Democrats, who hope to ram the larger bill through Congress using reconciliation, which prevents needing any Republican votes.

“These are his proposals. These are his bold ideas,” White House press secretary Jen Psaki told reporters before the meetings, adding later, “And he wants to make the case directly to members.”

Members who met with him said he circled a number around $2 trillion.

Biden expressed optimism while walking with Pelosi, telling reporters, “We’re going to get it done.”

Rep. Jimmy Gomez (D-Calif.), a member of the progressive caucus, took to Twitter to tell supporters that the push to pass both bills isn’t over. “Negotiations are messy. But we made progress,” he said.