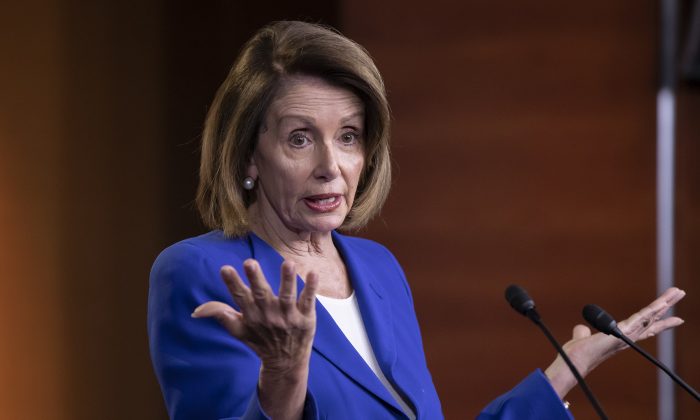 Pelosi Declines to Negotiate on Wall Money Even With Government Reopened

House Speaker Nancy Pelosi (D-Calif.) said that she would not negotiate on funding for the southern border wall, going back on her promise to negotiate with President Donald Trump if he agreed to end the partial government shutdown.

“There’s not going to be any wall money in the legislation,” Pelosi told reporters on Jan. 31, reported The Associated Press. She suggested she’d be open to vehicle barriers known as “Normandy fencing” instead.

She also said that she was open to negotiating on other points, such as border technology, but Trump has said for weeks that he wouldn’t agree to anything without funding for the wall, making Pelosi’s supposed openness to negotiation ring hollow.

A short time later, Trump was asked at a bill signing about Pelosi’s comments.

“I’m not waiting for this committee and I’ve told a lot of people I don’t expect much coming out of the committee because I keep hearing the words that ‘We’ll give you what you want but we’re not going to give you a wall,'” Trump said. “And the problem is if they don’t give us a wall it doesn’t work. Without a wall, it doesn’t work.”

Pelosi’s comments came after a committee composed of Republican and Democrat representatives and senators met for the first time on Wednesday, Jan. 30, seeking to hammer out an agreement that satisfies both sides.

Democrats have for the most part refused to budge on giving no funding for the wall, led by Pelosi.

Republicans, meanwhile, are seeking to obtain funding to keep building the southern border wall, as Trump has refused to sign appropriations that don’t include funding.

After a shutdown that started in December 2018 stretched past a month, Trump agreed to temporarily reopen the 25 percent of the federal government affected by the standoff, noting that Democrats had repeatedly promised to negotiate with him if the government was reopened.

The committee is expected to wrap up around Feb. 10 as under the temporary funding the government agencies in question will shut down against on Feb. 15 if an agreement isn’t reached.

On Thursday, House Democrats also released a detailed summary of their opening offer in the negotiations, which didn’t include any money for building the wall, reported Reuters. Instead, they proposed giving Customs and Border Protection $98 million more than the agency received last year, enough to hire about 1,000 more Border Patrol agents, as well as giving $77 million more than the $353 million that Trump requested for buying and deploying security technology.

But the president has argued that while technology and agents are crucial to border safety, it’s impossible to keep the country secure without a wall stemming the flood of illegal aliens that agents have had to deal with in recent years.

Large sections of WALL have already been built with much more either under construction or ready to go. Renovation of existing WALLS is also a very big part of the plan to finally, after many decades, properly Secure Our Border. The Wall is getting done one way or the other!

He also noted in a video message later on Thursday that building the wall would help stop human trafficking, which is common along the porous border.

Earlier he took to Twitter to say that whatever happened, he’d get the wall built.

“Large sections of WALL have already been built with much more either under construction or ready to go. Renovation of existing WALLS is also a very big part of the plan to finally, after many decades, properly Secure Our Border. The Wall is getting done one way or the other!” he said in one tweet.

In another, he added: Let’s just call them WALLS from now on and stop playing political games! A WALL is a WALL!