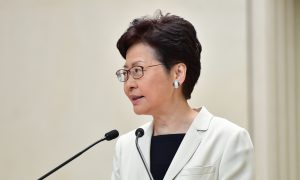 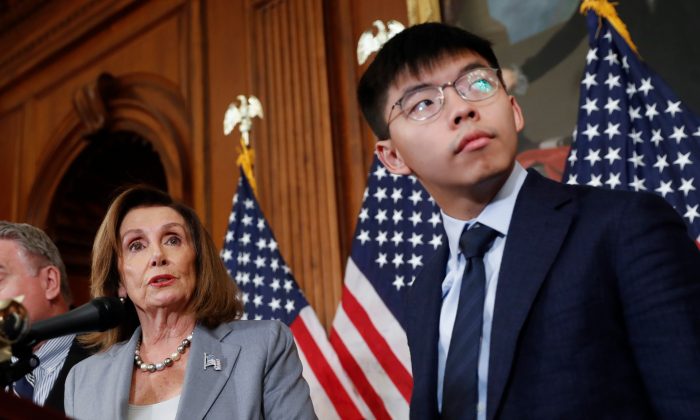 Speaking at a joint press conference on Sept. 18, Pelosi supported the Hong Kong Human Rights and Democracy Act, which was introduced to the Senate and House earlier this year to counter Beijing’s abuses in the city.

“Democrats and Republicans in the House and the Senate enthusiastically support this legislation,” Pelosi said. “We stand with … all who are fighting for a peaceful, hopeful future.”

The conference included Hong Kong pro-democracy activists, including Joshua Wong, general-secretary of the Demosisto Party, and singer Denise Ho. The activists came to Washington to garner support for the bill and testify before a congressional commission on Sept. 17.

The legislation would require the United States to conduct an annual review of whether it should continue to give special treatment to Hong Kong in areas including trade and investment.

It would also require the U.S. administration to identify and sanction people responsible for “abducting and torturing” human rights activists in Hong Kong.

Eliot Engel (D-N.Y.), chairman of the House Committee on Foreign Affairs, said the bill would send a message to Beijing that undermining Hong Kong’s autonomy was a direct U.S. concern, rejecting claims that the move amounted to interference in China’s domestic affairs.

“When it comes to Hong Kong … Democrats and Republicans in Congress are on the same side, the side of the people of Hong Kong, the side of democracy and human rights,” Engel said at the press conference.

Hong Kong, a former British colony, returned to Chinese rule in 1997 under the “one country, two systems” formula that promised the city a higher degree of freedom and autonomy than on the mainland. Critics say that Beijing has failed to uphold this pledge, and been steadily interfering in the city’s affairs.

The city has been rocked by mass protests since June when anger sparked over a controversial extradition bill that would have allowed people to be transferred to the mainland for trial in courts controlled by the Chinese communist regime. The movement has since broadened to include calls for democracy.

Despite the fact that the Hong Kong leader announced the withdrawal of the bill in September, protesters have said the gesture isn’t enough and have continued to call for further demands, including universal suffrage.

Rep. Michael McCaul (R-Texas) described the protests as a battle between “liberty versus tyranny and freedom versus oppression.”

“The world will not stand by idly as the Chinese Communist Party continues to commit human rights violations,” he said.

Wong said it was a remarkable day to see the U.S. lawmakers “stand as one” with Hong Kong.

“We will continue our uphill battle until the day we enjoy freedom and democracy.”