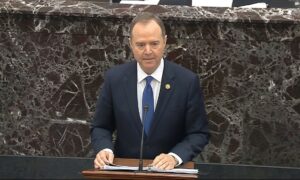 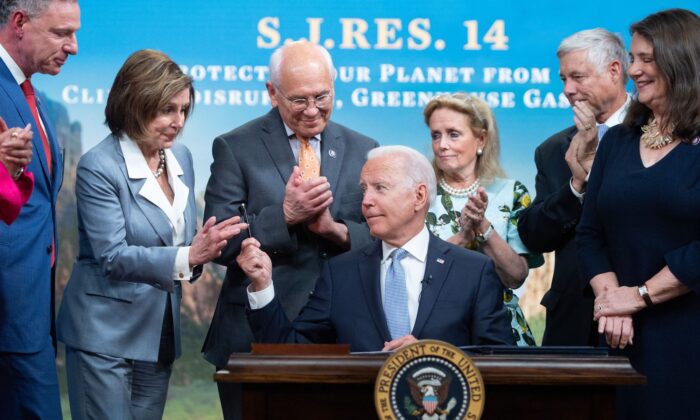 President Joe Biden hands a pen to House Nancy Pelosi (2nd L), alongside other members of the House, after signing a bill dealing with greenhouse gas emissions, in the Eisenhower Executive Office Building, in Washington, on June 30, 2021. (Saul Loeb/AFP/Getty Images)
Democrats

House Speaker Nancy Pelosi (D-Calif.) says President Joe Biden doesn’t have the legal authority to forgive federal student loans, in what appears to be a disagreement with other top Democrats.

But during a weekly press conference on July 28, Pelosi said Biden can only pause or delay student loan payments and can’t unilaterally cancel them.

“He can postpone, he can delay, but he does not have that power,” Pelosi told reporters. “That would best be an act of Congress.”

Schumer and other progressive Democrats have argued that Biden can forgive student loans using the same legal provision that former President Donald Trump used to delay payments on loans and interest starting in March 2020 amid the COVID-19 pandemic.

The recent comments from Pelosi are sure to trigger pushback from some Democrat lawmakers.

On July 27, Schumer, Sen. Elizabeth Warren (D-Mass.), and Rep. Ayanna Pressley (D-Mass.) called on the president to extend a pause on student loan payments and move on forgiving debts.

“To make borrowers repay their debts now would be unfair, would be harsh, and in many instances would be cruel. People were thrown off their stride by COVID. Give them a chance to recover,” Schumer said, adding that the president has “existing legal authority” to cancel up to $50,000 in debt.

Warren, who has long championed loan forgiveness, said on July 27: “Every day that goes by, that sword draws a little closer. The President can remove this sword, and can remove this pain, by canceling $50,000 or more in student loan debt.”

If a student loan forgiveness bill is introduced in Congress, it appears unlikely that there will be enough votes for it. Some moderates have said that canceling student loan debt would be unfair to those who have already paid their debt.

Sen. Jon Tester (D-Mont.) told reporters earlier this year, “I’m not inclined to support because a lot of people have worked very, very hard to pay off their debts, and this would set a bad example.”

Sen. Joe Manchin (D-W.Va.) said around the same time that he would be concerned about how the government would pay for that much student loan forgiveness.

On July 9, the Biden administration announced it would cancel about $55.6 million in student loan debt for around 1,800 people who attended three colleges that later were found to have defrauded them, according to the Department of Education.

In March, the Department of Education, in scrapping a Trump administration policy, canceled $1 billion in student loan debt for approximately 72,000 borrowers.

During his 2020 campaign, Biden had called for forgiving $10,000 in student debt for borrowers, even going so far as to say that he would “eliminate your student debt” during a town hall meeting last year. “I’m going to make sure everyone gets $10,000 knocked off of their student debt” amid the pandemic, he said at the time.

Biden in April ordered the administration to carry out a legal review of the legal framework around student loan cancellation but hasn’t yet announced a report.