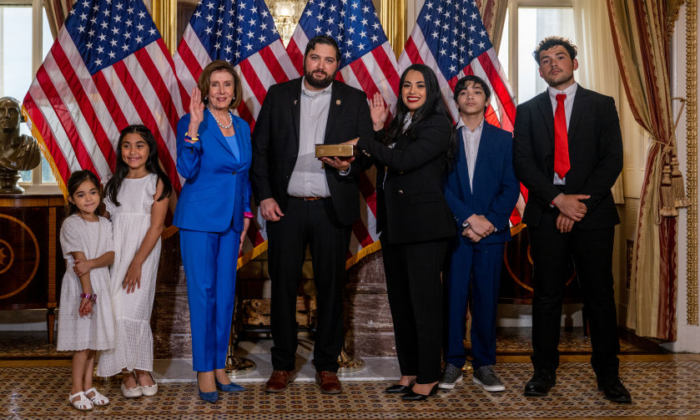 Rep.-elect Mayra Flores (R-TX) stands with her family and Speaker of the House Nancy Pelosi (D-CA) for a portrait after being sworn-in on June 21, 2022 in Washington, DC. (Brandon Bell/Getty Images)
US News

Pelosi Appears to Elbow Away Daughter of Newly Elected Congresswoman

Rep. Flores (R-Texas) has responded to a video in which House Speaker Nancy Pelosi (D-Calif.) appeared to elbow away Flores’ daughter during her swearing-in ceremony last week.

A video posted on social media Sunday night showed Pelosi standing next to Flores’ two daughters on stage as the speaker swore in Flores on June 21. Pelosi looked down at the girl next to her and positioned her forearm and elbow to nudge the child to the side.

Followers on social media began questioning the incident on Flores’ Twitter and Facebook accounts on Sunday as the video made its rounds.

I am so proud of my strong, beautiful daughter for not allowing this to faze her. She continued to smile and pose for the picture like a Queen.

No child should be pushed to the side for a photo op. PERIOD!! https://t.co/TA50EntDoq

In a response on Twitter, Flores said she was proud of her daughter for not letting the incident faze her.

“She continued to smile and pose for the picture like a Queen,” Flores wrote. “No child should be pushed to the side for a photo op. Period!”

Flores was sworn in as the first Republican to represent Texas Congressional District 34 in more than 100 years.

Flores, a legal immigrant from Mexico who is married to a border patrol agent, won a special election to replace former Rep. Filemon Vela (D-Texas), who resigned this spring to work for Akin Gump, a Washington law and lobbying firm.

She will only hold the office until January 2023—unless she can beat Rep. Vicente Gonzalez (D-Texas) in the midterm election this November.