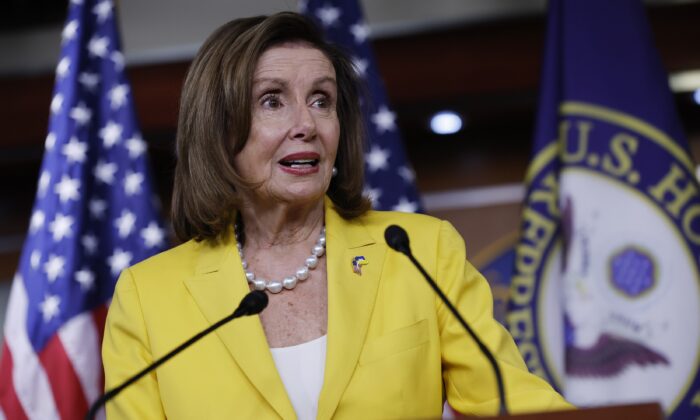 Speaker of the House Nancy Pelosi (D-Calif.) announced in a July 29 letter to Democrats that an intra-party impasse over a bill to ban assault weapons had been bridged, and said that a vote on the bill will be held the same day.

The bill would ban an array of semi-automatic firearms dubbed “assault weapons” by critics, though the exact meaning of the term has long been contested by Republicans and Second Amendment advocates.

In a “Dear Colleague” letter, Pelosi wrote: “House Democrats are committed to building safer communities, in every corner of the country. To that end, our Members have been working on a robust package of public safety bills and have made immense progress in our discussions. Work continues on this essential legislation, and we plan to bring this legislation to the Floor—increasing safety with accountability.”

“Thanks for putting People Over Politics,” the brief letter concluded.

Initially, the bill was set for consideration on July 27.

However, that vote was delayed after infighting among Democrats—several Democrats reportedly had refused to vote for the bill—threw into doubt the possibility of advancing the legislation through the House. Because Democrats hold the lower chamber by four seats, Pelosi can scarcely afford to lose a single vote on the legislation, which is likely to face unified GOP opposition.

This impasse seems to have been overcome, however, and the bill is now set for consideration in the House sometime on the afternoon of July 29.

The bill has advanced at a rapid trot, first passing the House Judiciary Committee on July 20 over unanimous GOP opposition.

This bill is only the latest in a series of efforts by Democrats in the House and Senate seeking to advance much stricter gun control laws.

At the end of June, a compromise gun bill brokered in the Senate between Sens. John Cornyn (R-Texas) and Chris Murphy (D-Conn.) won enough support to overcome the 60-vote filibuster threshold, and has since passed the House and been signed into law by President Joe Biden.

While the measure was a victory for gun control proponents and a stinging defeat to Second Amendment advocates, Democrats have little chance of being able to replicate the feat with more wide-reaching firearms legislation.

Even if the House were to approve the assault weapons ban, it’s all but guaranteed to fail in the Senate, where it will likely fail to gain the support of at least 10 Republicans to overcome the filibuster threshold.