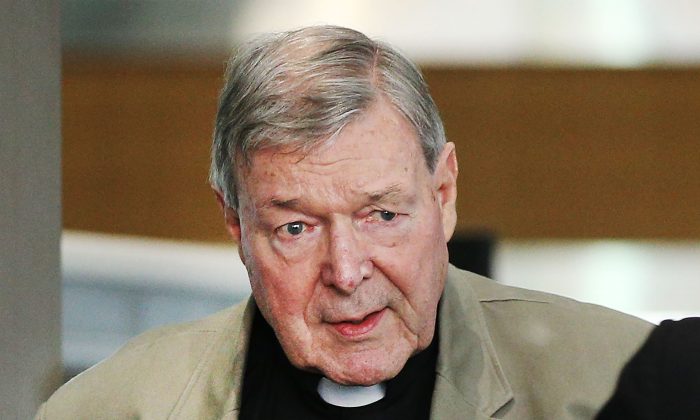 Cardinal George Pell has been taken into custody and will spend his first night in a jail cell for sexually abusing two choirboys in a Melbourne cathedral.

Pell was found guilty in December of orally raping a 13-year-old boy and molesting another after Sunday mass at St Patrick’s Cathedral in East Melbourne in 1996.

At the conclusion of a pre-sentence hearing on Feb. 26, County Court Chief Judge Peter Kidd instructed officers to “take him away, please.”

There was silence in the filled courtroom as Pell slowly stood and was handed his walking stick.

Australia’s top-ranking Catholic strode, head down, to the door beyond which he will spend his first night in jail.

The 77-year-old paused at the threshold, turned to Judge Kidd and bowed.

It is expected he will be placed in protective custody and will await a sentencing hearing scheduled for March 13 before seeking bail.

“Cardinal George Pell has not applied for bail today,” lawyer Paul Galbally said in a statement.

“He believes it is appropriate for him to await his sentencing.

“Despite the unprecedented media coverage, Cardinal Pell has always and continues to maintain his innocence.”

A bail application had been listed in the Court of Appeal on Wednesday afternoon but was withdrawn.

The physically ailing Pell had previously been on bail throughout the proceedings and underwent double knee surgery in Sydney in December.

His lawyers have lodged an appeal on three grounds, including that the jury verdict was unreasonable.

Robert Richter QC has argued his alleged offending was at the low end of the scale.

“This is no more than a plain, vanilla sexual penetration case where a child is not volunteering or actively participating,” he said.

Mr Richter also said a “temporary loss of judgment” could not be ruled out.

But Judge Kidd pushed back, saying Pell had engaged in shocking conduct that allowed no “innocent explanation.”

“At the moment I see this as callous, brazen offending. Blatant,” the judge said.

“It leaves to me only one inference, which is at the time he thought he was going to get away with it.”

“These people love him; none of them believe he is capable of these offences,” Mr Richter said.

Mr Richter said Pell was a man of the “highest character.”

“He relates to everyone from a prime minister to street beggars,” he said.

“The prisoner has shown no remorse or insight into his offending,” he said.

Two 13-year-old boys “nicked off” after a Sunday solemn mass in late 1996 and were caught swigging sacramental wine in the priest’s sacristy by Pell, newly installed as Archbishop of Melbourne.

Pell scolded them, exposed himself from beneath his ceremonial robes, and molested them.

A Melbourne jury in December found Pell guilty of five charges—one of sexually penetrating a child and four of committing indecent acts with children.

That verdict was made public on Feb. 26 after months of procedural secrecy, and the abandonment of a second trial over allegations Pell indecently assaulted boys in Ballarat in the 1970s.

The testimony of one of Pell’s victims was read to the court by Senior Crown Prosecutor Mark Gibson SC.

“He planted himself in the doorway and said something like ‘what are you doing here’ or ‘you’re in trouble.’

“I didn’t complain to anyone at that time. It felt like an anomaly. I was in shock and didn’t tell.

“It’s something I’ve carried for the whole of my life … it took a courage much later in life for me to even think about coming forward,” the victim’s statement read.