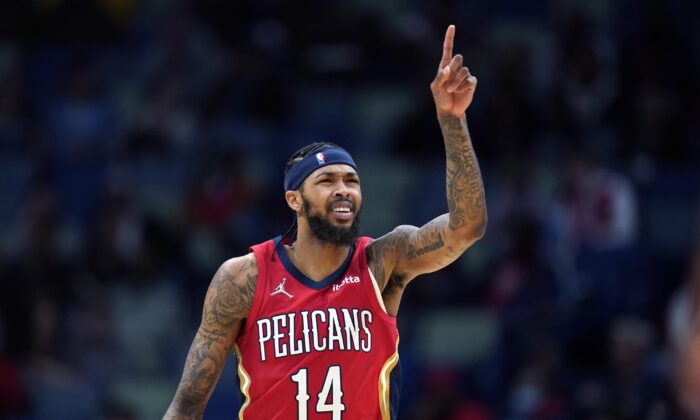 New Orleans Pelicans forward Brandon Ingram gestures, in the first half of an NBA basketball game against the Memphis Grizzlies, in New Orleans, on Nov. 13, 2021. (Gerald Herbert/AP Photo)
NBA

The victory was the first at home this season for the Pelicans, who had lost 12 of their first 13 games playing without Zion Williamson, sidelined with a broken right foot.

“We won. It feels good to say that,” said Pelicans coach Willie Green, who got his first win since Oct. 29. “It’s been building toward this. Even in the last game (a 120–112 loss on Friday to the Nets), we could see player movement, ball movement, guys knocking down shots. We just stuck with it.

“We’ve got a long way to go, but we’re just going to enjoy tonight being in the winner’s circle for the first time in a while.”

Herb Jones added 17 points, and Jonas Valanciunas and Devonté Graham each had 15. Valanciunas faced his former team for the first time.

Dillon Brooks led Memphis with 23, and Ja Morant had 22.

“We’re in a little slump,” Brooks said, referring to the Grizzlies’ 43 percent shooting from the floor and 33 percent from 3-point range. “We’ve just got to find a way to shoot our shots confidently, be able to guard the ball one on one and just be confident when you wake up every day. Put your hard hat on and come to work and be confident and know why you’re here.”

Ingram said he was thrilled by the Pelicans’ ball movement, which led to 29 assists on 38 made baskets, one assist shy of the team’s season-high. Josh Hart had a career-high 11 assists.

“It was just taking the right shots at the right time and making sure I’m getting my teammates the ball and making sure we get the best shot for the team,” said Ingram, who had four assists. “On the defensive end it was just staying locked in and trying to do my job.”

Blown out at home a night earlier by Phoenix, Memphis used a 10–0 third-quarter run to cut it to 81–72, but the Grizzlies could not get any closer.

Pelicans: During F Brandon Ingram’s seven-game absence, the Pelicans lost all seven games by an average margin of 14.9 points.

Pelicans: At Washington on Monday night.