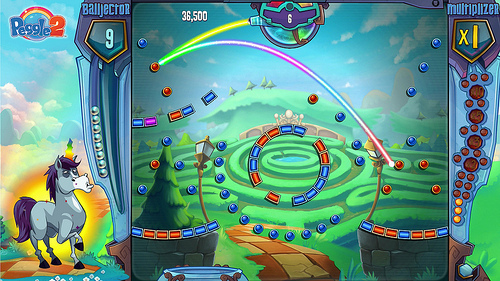 Peggle 2 is Out Exclusively for Xbox One; Game is Getting Good Reviews

The Peggle 2 release date has passed, and it is now available on download for Xbox One but not PS4.

The game, a follow-up from Peggle Nights, is getting good reviews from gaming websites.

Bio Gamer Girl, who gave it an 8 out of 10, said in her review that Peggle 2 “makes some simple but incredibly effective improvements over one of the most addictive downloadable title from the last console generation of gaming.”

She added: “The new release is the perfect example of a must download and own title for early adopters of the Xbox One.”

While a potential downside at the moment is the limited characters–five, with Bjorn joined by Jeffrey, who can shoot a large Bowlder that’s similar to the dragon fireball special shot; a yeti  called Berg who has a deep freeze ability; a robot called Gnorman who has an ability to shock nearby pegs; and a zombie called Luna whose Nightshade ability makes blue pegs transparent–she says that it may be expanded later, which is what happened with the original. Peggle 2 features 60 new stages.

Peggle 2 includes the multiplayer mode, which includes online play. But another potential con is that players “must purchase additional content to enjoy game fully.”

“Like all great games, it has a core gameplay concept that’s easy to learn but hard to master,” it said. “It’s this trait that can keep players frustrated at a stage for hours but still feel compelled to finish it.”

The game also earned a positive review (9 out of 10) from IGN, which  called it “a return to joy.”

“Playing Peggle 2 just makes me happy,” Ryan McCaffrey writes in the review. “Whether I’ve just hit an unbelievably improbable shot or I’m watching a gratuitous display of abominable snowman twerking by new Peggle Master Berg after triggering a level-ending Extreme Fever, its ability to bring a smile to my face is uncanny. Way back in 2007, the original pachinko-meets-pinball Peggle was arguably the best puzzle game to come along since the legendary Tetris, and its sequel brushes off a few annoyances to become the first no-brainer, just-play-this-now game on the Xbox One.”