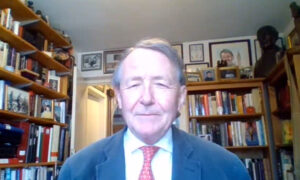 Legitimacy of Trading With Genocidal Countries Is the Battle of Our Times: Lord Alton
0
Share Now
TelegramFacebookTweetEmailTellMeWeReddit
Copy Link 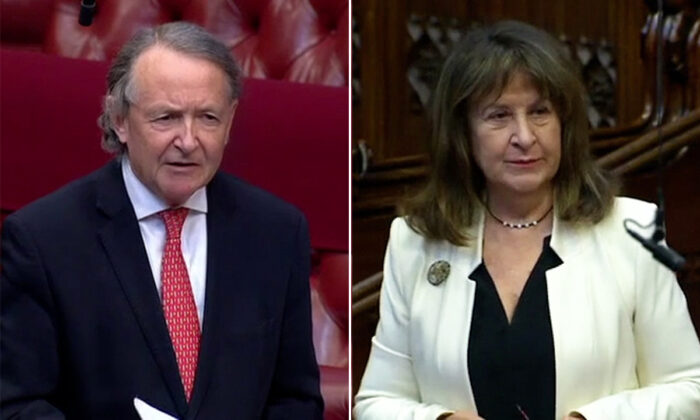 Lord Alton of Liverpool and Baroness Kennedy of The Shaws speak on the genocide amendment in the House of Lords in London on March 23, 2021. (Parliamentlive TV/Screenshot)
UK

A group of UK peers are pushing to set up a committee of former judges to determine whether there is a genocide taking place in China’s Xinjiang region, after the government prevented them from writing into law a Parliamentary Judicial Committee that can rule on genocide.

The best people to rule on genocide are “judges who are well equipped and skilled in assessing evidence in an independent way,” Baroness Helena Kennedy, director of the International Bar Association’s Human Rights Institute, told NTD on Friday.

“We were very keen that our own High Courts might be involved, but government is not very keen on that,” she added, referring to the government’s opposition to a “genocide amendment” to the Trade Bill, which originally sought to give UK courts power to rule on genocide.

“And what we’ve suggested as an alternative is that a committee of the House of Lords is created, on which senior retired judges would sit and could fulfil that function of determination as to whether there is indeed a genocide in progress in Xinjiang province, and whether the evidential thresholds have been met,” Kennedy said.

Benedict Rogers, deputy chair of the Conservative Party Human Rights Commission (CPHRC), said that the setting up of such a committee would be a “very welcome move.”

“And the House of Lords would be entirely within its rights to form such a committee, and that at least will provide a legal expertise behind a genocide determination,” he added.

“If the Lords do set it up, that’s everything we asked for. What they do will have impressive force. Four or five ex-judges opining on genocide is going to make people sit up,” he told The Telegraph on March 23.

Peers have pointed out that “no British government in modern history have ever declared a genocide while it was taking place” because it’s been the long-standing position of successive UK governments that only a “competent court” can rule on genocide, yet the international courts are paralysed due to Russia and China’s veto power.

Alton has said that he proposed the amendment because, back in 2016, Parliament couldn’t make the government declare what was happening to the Yazidis in northern Iraq to be a genocide because the government insisted that only a court can make the determination.

The original genocide amendment—which would have given UK domestic courts power to make preliminary judgements on genocide—gained overwhelming cross-party support in Parliament and ignited a major Tory rebellion. It was defeated by only 11 votes, even though the Conservative government has an 80-seat majority in the House of Commons.

After three rounds of negotiations and compromises, MPs voted on March 22 on two competing versions of the amendment: the government’s version, which designates a responsible parliamentary committee to examine evidence on alleged genocide and push the government to act on such evidence; and the Alton version, which would set up a Parliamentary Judicial Committee with ex-judges to do the job.

The government narrowly defeated the Alton amendment, which it said would “confer quasi-judicial status” on the Parliamentary Judicial Committee. However, Parliament was told that current rules wouldn’t prohibit ex-judges from being put on a committee.

Parliamentarians can use standing orders to set up a joint committee of both Houses, Sir Robert Neill, the author of the government’s amendment, told MPs.

Minister for Investment Lord Gerry Grimstone also assured peers that the government would support the setting up of a committee by standing order.

“It is ultimately up to Parliament how it wishes to organise its own affairs,” Grimstone told peers on March 23.

Alton replied by saying that a “Joint Committee on Human Rights is not a bad precedent, were we to go down that route,” while keeping other options open.

“In line with what the House of Commons decided yesterday, our House could, if it wished, establish its own ad hoc committee comprising former judges who now sit in the Lords,” he said.

“To determine precisely what a genocide is will take time, expertise, and great knowledge of the law—things that this House is uniquely equipped to contribute. Such a committee should urgently evaluate the evidence of the genocide and atrocity crimes being committed against the Uyghurs in Xinjiang,” Alton said.

“This is undoubtedly urgent, and I will write to the Liaison Committee urging it to think about the various options open to it.”

Hours before the last Commons vote on the genocide amendment, the UK government announced sanctions against four Chinese officials over the alleged human rights abuses of Uyghur Muslims, but stopped short at calling the abuses “genocide,” a declaration that has already been made by several countries, including the United States, Canada, and the Netherlands.

Duncan Smith said the UK was “dancing elaborately around the whole idea of genocide when it is clear that that is what is going on.”

In retaliation to the UK’s sanctions, the Chinese regime on Friday sanctioned nine British individuals and four entities for their stances on Xinjiang, including Alton, Kennedy, Duncan Smith, and the CPHRC, which Rogers chairs.

Prime Minister Boris Johnson on Saturday met with five of the parliamentarians on the sanctions list, and expressed his solidarity with them.

“This morning I spoke with some of those who have been shining a light on the gross human rights violations being perpetrated against Uyghur Muslims,” Johnson wrote on Twitter. “I stand firmly with them and the other British citizens sanctioned by China.”