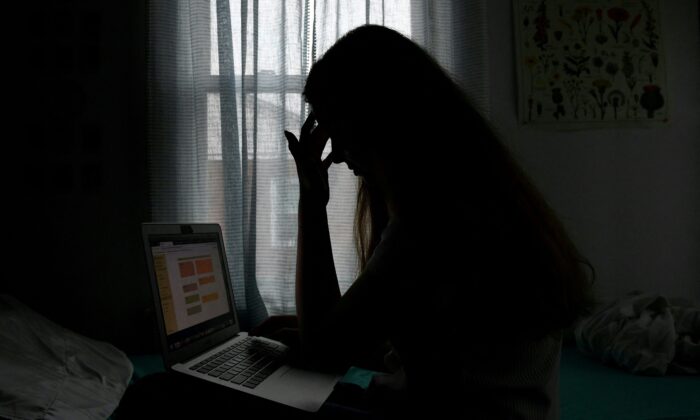 A teenager with a laptop in Arlington, Va., on June 11, 2021. (OLIVIER DOULIERY/AFP via Getty Images)
Social Issues

A pediatric clinic at Tennessee’s Vanderbilt University has come under fire for purportedly describing transgender surgery for children as a “big moneymaker.”

Matt Walsh, a podcast host and commentator at The Daily Wire, on Tuesday shared a series of videos and archived webpages about the so-called “gender-affirming care” being offered by the Vanderbilt University Medical Center (VUMC). He said the Nashville-based facility was offering “drugs, chemically castrates, and performs double mastectomies on minors.”

One of the videos shown features a 2018 lecture given by Dr. Shayne Taylor who helped launch VUMC’s Pediatric Transgender Clinics that year. In her speech, Taylor explained that transgender treatment became a highly profitable business because of Obamacare, under which insurance providers had to cover “medical expenses for trans folks.”

For example, Taylor said that each girl looking to undergo “top surgery” or chest reconstruction can bring in $40,000 for the university hospital. A “bottom surgery,” or vaginoplasty, can bring in $20,000, and that doesn’t include costs such as the hospital stay, post-operation care, and anesthesia. A patient receiving “routine hormonal treatment,” who is only attending a few times a year, can bring in “several thousand dollars,” she said.

“The female-to-male bottom surgeries, these are huge moneymakers,” Taylor continued, adding that she knew a clinic that was able to fund itself entirely by performing phalloplasties, the construction of a penis-like flesh structure on a biological woman.

Another video showed Dr. Ellen Clayton, a Vanderbilt health law expert, telling staff that “conscientious objections” to transgender surgeries are “problematic,” and that such staff would face “consequences” for refusing to be involved in those surgeries due to their religious beliefs.

Shortly after Walsh’s report, the VUMC, as well as Monroe Carell Jr. Children’s Hospital at Vanderbilt, updated their websites to hide materials and services promoting transgender treatment to potential child clients. That included a “Trans Buddy Program,” which pairs young patients with transgender activists with the stated goal of “empowering the patient to make informed healthcare decisions.” The page to “Trans Buddy Program” now directs to VUMC’s homepage.

The report has prompted prompted Tennessee Republican Gov. Bill Lee and Sen. Martha Blackburn (R-Tenn.) to call for an investigation into the matter.

“The ‘pediatric transgender clinic’ at Vanderbilt University Medical Center raises serious moral, ethical, and legal concerns,” Lee said in a statement to The Daily Wire. “We should not allow permanent, life-altering decisions that hurt children or policies that suppress religious liberties, all for the purpose of financial gain. We have to protect Tennessee children, and this warrants a thorough investigation.”

“We are shocked by what we have seen in these videos. We would hope that VUMC would make better decisions,” Blackburn wrote on Twitter. “There is nothing healthy about mutilating the bodies of minor children. We need an investigation into VUMC putting profits ahead of children immediately.”

In the wake of the social media outrage, VUMC didn’t question the authenticity of the videos obtained by Walsh, but claimed that they “misrepresent facts” about the services it offers.

“VUMC requires parental consent to treat a minor patient who is to be seen for issues related to transgender care, and never refuses parental involvement in the care of transgender youth who are under age 18,” the hospital stated.

“Our policies allow employees to decline to participate in care they find morally objectionable, and do not permit discrimination against employees who choose to do so. This includes employees whose personal or religious beliefs do not support gender-affirming care for transgender persons,” it continued.

When it comes to “Trans Buddy,” the hospital said the program has received “national acclaim” and is meant to support vulnerable people “seeking highly personal care in an unfamiliar environment.” It didn’t explain, however, why a decision was made to remove the program from the hospital’s website.