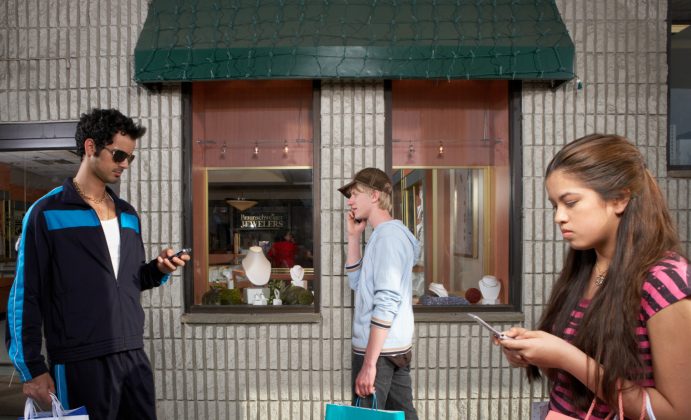 Pedestrian Etiquette, Gormless Phone Users, and the Rise of the ‘Meanderthal’

In an experiment for a forthcoming National Geographic television show Mind Over Masses, a pavement was divided into lanes, separating those that are walking from those walking while talking on mobile phones.

This may be a breezy way of showing the irritation some feel about how others use mobile phones. But the proposed solution is really just another form of control, when what we need is not a test of people’s obedience, but a reassessment of how we interact with each other in public.

Civil society, to remain civil, requires an agreed framework for behaviour in public. You might call it etiquette, although that word has often aroused suspicions, with some seeing it as an infringement of their personal liberties. Justifiably so, if you look at traditional concepts such as deferring to rank, treating women as the “weaker sex”, bowing and scraping. But etiquette based on mutual recognition of fundamental human equality can make civic life more free, and more pleasant, for everyone.

Simple street etiquette could improve safety and comfort for all, and save millions in signage, policing, separation of traffic, and various other complex and expensive means of regulating public space. Imagine uncluttered public landscapes where people are comfortable and can move easily. This is possible only by returning to first principles of civil society, and not resorting to mechanisms of control. The common law, after all, is rooted in ground-up custom, not top-down control.

The alternative is a society based on hierarchy, where those accustomed to projecting an air of entitlement claim the largest share of public space. Or one based upon control and obedience, where people are told unequivocally where to be and are punished for stepping out of bounds, or both. The clearest examples are societies run by organised crime such as the mafia. Gangsters opportunistically thrive on mistrust, on inflexible hierarchies, and on a breakdown of civil society.

Democracy is the practice of resisting these forms of hierarchy and of concentration of power, wealth and cronyism – and the violence that often accompanies them. Our own society and institutions are not entirely free of the tendency towards using force and coercion, and it’s important to watch for it and resist it when it arises.

But this sort of power play happens on a miniature scale on many streets everywhere in the UK every day. In practice, people walk to the left or right as they will, with many who are able to exercise their dominance preferring the inside of the pavement away from traffic. Some try to keep left as a rule, some keep right as a rule and others duck and dive to find the path of least resistance. It is either the most aggressive pedestrian or the person who can project the greatest air of entitlement that wins.

All of this before even taking into account the oblivious “meanderthal” – of which the finest example is surely the semi-aware, distracted, walking mobile phone user. It is both rude and undemocratic to walk while on the phone; it forces others to take full responsibility for both their comfort and safety and that of others, while the screen-bound meanderthal acts as if they are above such responsibility.

Mistrust and micro-aggressions in public space are symptomatic of instability in the larger society. One small and simple measure that could change the pedestrian experience would be if people agreed to keep left on footways as a general rule. This is already loosely called for within the Highway Code, which stipulates that one should “avoid being next to the kerb with your back to traffic”.

This makes good sense, but is impossible for pedestrians to heed when cities are filled with exceptions such as one-way streets, signals, and other contrary signage. A simple, blanket rule could be agreed while we work on re-evaluating the rest. Shared space schemes, proven to make streets safer, seek to remove street clutter and rely on eye contact, interaction, and etiquette.

It’s common in the design of cities to use evidence-based studies and computer models to try to predict behaviour so that it may be accommodated or controlled. This does us a disservice – what and who is our public realm for, who does it serve, if not for our democratic communities? We must first ask how our public landscapes serve our highest common ideals, and then work the rest out from there.

Tim Waterman lives in London and lectures in landscape architecture at the Writtle School of Design in Essex, and is a thesis tutor at the Bartlett School of Architecture, University College London. He is the honorary editor of Landscape: The Journal of the Landscape Institute, for which he writes the regular column ‘A Word …’. This article was originally published on The Conversation. Read the original article.