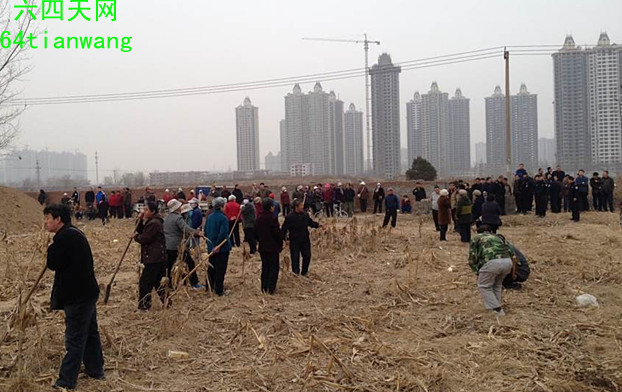 Caption: Over 100 Chinese farmers with farm tools prepare to repel developers in Shijiazhuang, Hebei Province, in a March 18 incident. Rapid urbanization has brought about over 100,000 protests a year in China, with more than half of them over land appropriations. (64 Tianwang)
China

In a field outside of Shijiazhuang this week, China’s official urbanization policy met with resistance from hundreds of farmers with pitchforks, protesting the appropriation of their land for development.

With apartment blocks towering over them, more than 100 farmers gathered with shovels and pitchforks to repel developers, as China’s most frequent social conflict played out again in Hebei Province on Tuesday.

Reported by a Chinese website which covers human rights issues, this is but one of over 100,000 yearly “mass incidents”, as the Chinese Communist Party (CCP) has labeled protests of over 100 people. About half of those disputes were prompted by land seizures for development, according to China’s 2013 Social Development Blue Book.

Against the backdrop of the CCP’s release of its massive new urbanization plan on March 16, the success of this and other peasant protests looks bleak. State media Xinhua warns that urbanization and the modernization of agriculture are essential for the expansion of their domestic economy. The modernization of China will fail without stepping up the pace of integrating agriculture with information technology, that is, implementing precision satellite farming, said Xinhua.

The goal of moving China to a domestic economy can’t happen without the shrinkage of the rural population, one way or another. China’s urbanization goal is to count 52 percent of its population in cities by 2020, up from 43 percent claimed in 2010, says China’s National Health and Family Planning Commission (NHFPC).

Making the peasant farmers redundant is key to urbanization’s success. Because the country has a relatively low proportion of arable land to person, China must increase production from the land they do have, as their population increases. The state sponsored thrust for satellite guided tractors that practically steer themselves will eliminate the need for the majority of farmers and drive them to the cities.

The new urbanization report sugarcoats the bitter pill that China’s people of the land must inevitably swallow, promising them harmonious and pleasant living conditions, with more clean air and safe drinking water, and jobs in the cities—a dream that has yet to be realized by the masses that have been shipped to new concrete apartment blocks in new urban areas.