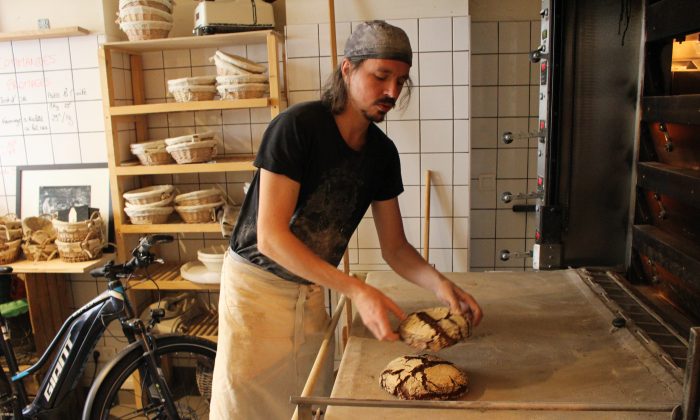 Maxime Bussy, owner and founder of Le Bricheton bakery in Paris, takes peasant chestnut bread out of the oven. (Alexia Luquet/Special to The Epoch Times)
Europe

PARIS—Don’t expect to find a regular French baguette at Le Bricheton, one of Paris’s most atypical bakeries. Its founder and owner, Maxime Bussy, has chosen to bake only old farmhouse-style bread made from ancient wheat varieties.

His aim is to help revive the country’s traditional bread culture, while making a positive impact on the future of agriculture. “Bricheton” means “the one-to-two-pound bread made for shepherds” in old French slang. Bussy calls it “the original bread.”

Bussy’s little bakery is nestled in the Charonne district, a Parisian village-like area close to the famous Père Lachaise cemetery. Besides the kind of bread he bakes, his bakery also has unusual business hours: three hours a day, five days a week.

“I didn’t want to have a frenetic work pace,” he said. Maybe that explains why, when he and his employee, Guilhem Rihet, talk about kneading the dough, they compare it to “meditation” and “relaxation.”

When Bussy, 37, opened the bakery in January 2016, he wanted to produce a healthy bread “with the same high nutritional value as the bread that was the primary food source back when French people were eating one kilo of bread per person, per day,” he said.

To that end, he traveled around the countryside to meet peasant bakers, who bake in the traditional way using several old wheat varieties that have been saved from extinction. Their total number is hard to quantify, but he estimates there are around 200 among a total of about 32,000 bakeries in the country.

“A peasant baker is a someone who is completely autonomous. His work goes from the seeds to the bread. He grows the seeds, mills his own wheat, then makes it into flour which he uses to bake bread,” Bussy explained.

Peasant bakers work on a small scale, and Bussy wanted to “bring this model from the French countryside to town.” He decided to mimic their working process, starting with not using anything apart from an oven. At Le Bricheton, there isn’t even a fridge. There’s no need to keep anything cool since the bread has just three ingredients: salt, pure water from ancient wells in Paris (there are three in all), and flour, the type used by peasant bakers.

“Using this kind of flour is a way to motivate farmers to grow peasant seeds,” Bussy said, noting that since the 1950s, most farmers have used wheat seed varieties from the official catalog of cultivated crops.

“Peasant varieties have been excluded from the catalog because they were not efficient enough, they did not withstand chemicals, and made flour harder to bake.”

According to French law, it’s forbidden to sell and buy these seeds—they can only be given or exchanged. So Bussy works with activist farmers, associations, and research institutes such as the National Institute for Agricultural Research to be able to use them.

‘Shaping the Future of Agriculture’

One of the many pluses of peasant bread is that it’s easy on the digestion, said Bussy. “Peasant wheat and flour contain a type of gluten that is natural and easier to digest.”

He takes care not to use any chemicals, including in the leaven he makes to raise the bread. “I produce and use a natural one with only water and flour, which have fermented. In conventional bakeries, they add chemicals at each stage of the baking process; you can end up with a bread that has 150 chemical additives.”

Another interest for Bussy is protecting biodiversity.

“You can consider that modern wheat varieties are all clones, whereas ancient varieties are made from different types,” he said. “To grow them requires mixing genetics, which gives them the force to adapt better to their environment and to have a stronger resistance to climate change.”

As part of achieving his goal, Bussy is involved in various networks and associations. “Today, I cannot separate my baker job from agriculture,” he said.

When he shares his experience at conferences and workshops, he always likes to tell the business side of his story. Because he didn’t have to spend a lot on machines, it only cost him 52,000 euros to get his bakery up and running, he said, whereas, in Paris, the average initial investment for a bakery is 500,000 euros.

After a few months, Le Bricheton was already making a profit—even though it’s only open 14 hours a week.

“My project is proof you can do something small but yet viable,” said Bussy. “My bakery is not a concept store, even if it’s hard to understand. It’s a long-term project shaping the future of agriculture.”

This activist/peasant touch in the heart of Paris is precisely what enticed Rihet—an ex-pastry chef who helped Pierre Hermé, named the World’s Best Pastry Chef in 2016, open his first boutique in France—to work with Bussy.

“I wanted to do something more meaningful,” he said.

The team also includes an apprentice baker, Mamadou Dabo, 17, who will stay for two years.

Dabo is a refugee from Guinea in West Africa, Rihet explains.

“You see, this is another reason why I love working here. When Maxime needs to hire an apprentice, he does not act like everyone else. He recruited Mamadou through an association for unaccompanied minor refugees. He managed to help someone.”

Some of Bussy’s former apprentices have gone on to start their own businesses abroad, including François de Halleux, who opened a bakery in Barcelona specializing in ancient wheat varieties. “He was working for Google before, another world, but he agreed with my mindset and understood the importance to work closely with local peasants,” Bussy said.

Word quickly spread about Bussy’s traditional approach to bread-making, and on weekends, the bakery is so busy that customers have to line up to buy his special bread.

He hopes the movement will grow, although he doesn’t see established bakers returning to traditional methods anytime soon. For now, Le Bricheton remains largely unique in the French bakery world.