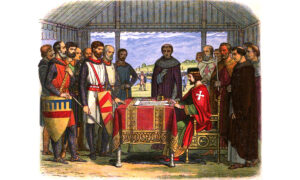 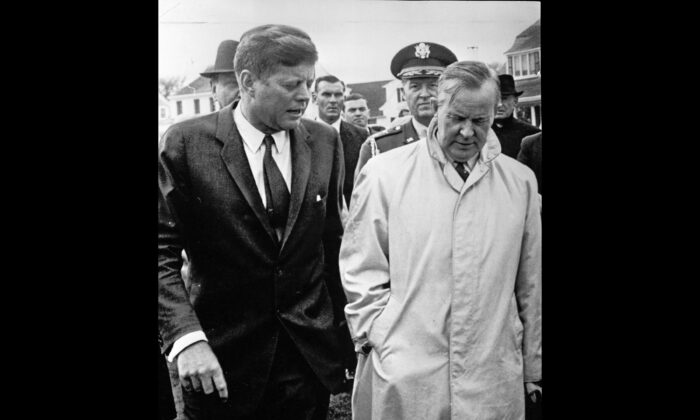 U.S. President John F. Kennedy chats with Canadian Prime Minister Lester B. Pearson as they walk toward the helicopter that flew Pearson back to Ottawa after a visit to the Kennedy family compound in Hyannis Port, Mass., in 1963. The two heads of government had spent two days discussing American-Canadian relations. (The Associated Press)
Viewpoints

Lester B. Pearson and John F. Kennedy—warriors, writers, statesmen—had much in common

In troubled times, it can be helpful to ponder the thoughts of learned people of compassion and action. Lester Bowles Pearson in Canada and John Fitzgerald Kennedy in the United States were two such people.

Pearson was Canada’s 14th prime minister, serving as head of two Liberal minority governments from 1963 to 1968. Kennedy was the 35th U.S. president, the man who safely saw us through the Cuban Missile Crisis of 1962 when nuclear war was narrowly averted. Kennedy’s assassination on Nov. 22, 1963, shocked not only his nation but the world, and many wept. Pearson called it “one of the great tragedies of history.”

If Kennedy was a natural politician, Pearson was not. As Conrad Black writes in “Rise to Greatness,” his history of Canada: “Lester B. ‘Mike’ Pearson (1897–1972) was … a congenial, urbane, and emollient man. … He was no more a politician in manner and appearance than at heart and lacked the instincts of combat on the hustings and for legislative manoeuvre for popular appeal.”

Pearson’s congeniality was a balm after the frenetic interregnum of the combative John Diefenbaker. Black writes that he re-established good relations with the European Economic Community (precursor to the European Union) and our best friend and trading partner the United States, then led by the youthful Kennedy. Twenty years younger than Pearson and more telegenic, Kennedy, like Pearson, was a model of restraint and fair-mindedness. The two got along.

Both men were classic liberals who embraced Enlightenment values. They were realists with an idealist bent. Realism, rooted in the writings of Machiavelli and others, views human nature as flawed, untrustworthy, and power-seeking. Idealism sees people as basically good and perfectible. In “The 20 Years’ Crisis,” E.H. Carr writes that realists see things as they are; idealists, as they wish them to be. The best approach is a mix of the two, Carr says, and that is why Pearson and Kennedy shine.

Pearson was born in Toronto, the son of a Methodist clergyman, at the tail end of the horse and buggy era. Like Kennedy, Pearson had Irish roots and served in the military. Apart from their upbringing (Pearson’s was humble, Kennedy’s affluent), the two men had a great deal in common.

Pearson served in the Canadian Army Medical Corps and the Royal Flying Corps in the First World War. Kennedy distinguished himself as a lieutenant in the U.S. Navy, winning its highest honour for gallantry as pilot of a gunboat, the famous PT-109, in 1944. Pearson graduated from the University of Toronto and later Oxford; Kennedy studied political science at Harvard, where his back was injured in a pile-up playing football. Pearson also played football, as well as hockey and baseball. In fact, Pearson played semi-pro ball for the Guelph Maple Leafs as an infielder in 1919. He and Kennedy, an avid fan of the Boston Red Sox, talked baseball when they met in 1963.

Pearson taught history and then became a career diplomat in 1928, appointed ambassador to the United States in 1945. He was present at the start of the United Nations, as was the young Kennedy as a reporter for Hearst newspapers. Pearson won the Nobel Peace Prize in 1957 for his role in launching peacekeeping (the United Nations Emergency Force) to resolve the Suez Crisis and keep peace between Israel and Egypt. Like Kennedy in the fall of 1962, he helped to pull the world from the brink of war.

Kennedy won a Pulitzer Prize for “Profiles in Courage,” his 1956 volume about eight U.S. senators who defied their parties and constituents to do what they felt was right. It is hailed as a classic testament to the indomitable spirit of men such as John Quincy Adams and Robert A. Taft. Kennedy also wrote “Why England Slept,” an explanation of why the democracies were ill-prepared for war with Hitler, followed by “Strategy of Peace” in 1960.

Pearson’s “The Four Faces of Peace,” a collection of his writings, came out in 1964. In one chapter he ponders the essential values of Western civilization, which he had delivered in a speech in 1959 to a group of summer-school teachers at Oxford University.

His speech is as relevant now as it was then. Pearson began by noting how belief in the inevitability of progress had given way to the gloomier assumption that Western civilization had seen its best days and was doomed to fail, as Greek and Roman civilizations had fallen before it.

“The madness of two world wars made this assumption seem reasonable enough,” he writes, “even though Western, liberal ideals showed great strength and resilience in those wars against the forces that had decreed their destruction, but were eventually destroyed themselves.”

By Western ideals, Pearson means those of liberal and parliamentary democracy, republicanism in the United States, English common law, and suspicion of all forms of authoritarian rule.

Those values, he writes, come from Greece, Rome, and Israel. From the Greeks: quality before quantity, honour before wealth, principle before practice. From the Romans: the tradition of order and organization, of “one law for all citizens,” of the responsibility of every citizen to do his duty by the state. And from Israel “came the spiritual heritage of one God, and the worth and value and equal rights of every person under that God.”

Then Pearson talks about the threats to Western values from within: “quite as dangerous and in fact a part of that from without (communism).” He is wary of the welfare state. “There has been much of value and of good in this concept, but only if we realize it is merely a means to an end, and not an end in itself. The end must be the better life, the freer life, the more expanding life of the individual.”

Pearson avowed, and this would also resonate with Kennedy: “The central value of our Western civilization is the stress that it rightly lays on the integrity … and worth of the individual personality. Lose this and we lose everything. From this all our other freedoms flow.” Social engineering and collectivism—elements of the Soviet totalitarianism that they opposed—were anathema to these men.

A citizen who believes “that government is not something to promote his dignity and worth, but merely something to increase his pension and free him from his own civic responsibilities, will give his support to those leaders which promise most to those ends,” Pearson writes. Then, “power will be gained by those who make the most alluring promises of immediate improvement, who appeal to selfish personal interests rather than to the sense of civic duty.”

Kennedy, in his inaugural address on Jan. 20, 1961, was clear and emphatic on duty: “Ask not what your country can do for you—ask what you can do for your country.” This challenged every American to work for the public good.

It is unfortunate the rapport of Pearson and Kennedy as national leaders lasted only seven months to the day (Pearson became prime minister on April 22, 1963). Prime Minister Brian Mulroney and President Ronald Reagan, also with Irish roots, enjoyed five years of friendship to 1989, which resulted in a sharp reduction in acid rain and freer bilateral trade.

As Canadians and Americans ponder their future, grasping for answers amid a global pandemic as well as socio-economic stresses and insidious threats such as Marxist militants, let us hope our leaders remember such models of reason and realism as Pearson and Kennedy. Each was flawed in his own way, yet each made strong contributions not only to his own country but to the world at large.

In our rich heritage of Enlightenment values, in our sharing of such classic Western mores as order under one law for all, our countries have much for which to be grateful. Sixty years ago, Pearson and Kennedy led the way. They can still be followed, for in their writings their light still shines.