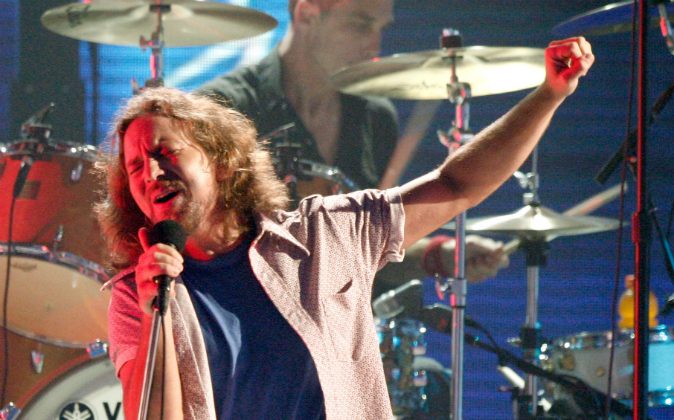 Singer Eddie Vedder of 'Pearl Jam' performs onstage during the 3rd Annual VH1 Rock Honors at UCLA's Pauley Pavillion on July 12, 2008 in Los Angeles, California. Pearl Jam was one of the nominees for the induction into the Rock and Roll Hall of Fame on Oct. 18. (Kevin Winter/Getty Images)
Entertainment

The nominations for the Rock and Roll Hall of Fame Class of 2017 have been announced.

American band Chic is a repeated nominee, having being nominated 11 times prior, the most in the history of the Hall of Fame. The band is led by guitarist and famed producer Nile Rodgers, who spoke about constantly being left off the ballot in a 2015 interview with the South China Morning Post.

“I honestly, honestly don’t get weird about it,” Rodgers said. “I can’t figure out what the criterion is. It’s actually sort of funny. “If it’s not based on statistics then it’s just an opinion poll deciding this person’s cooler than that person.

Rodgers added, “But if a hall of fame is something that says this person had 20 gold records or influenced this amount of people, I’ve sold more records than almost anyone in there. I’ve written more hit records than almost everybody in the Hall of Fame. Come on, guys!”

Artists become eligible for nomination 25 years after the release of their debut albums—in this case 1991. Inductees are chosen by an international body of more 800 artists, historians and members of the music industry. Fans can also vote at rockhall.com, which ends on Dec. 5.

The 2016 inductees will be announced in December and the induction ceremony will be take place at Brooklyn’s Barclays Center in April 2017. HBO will air the ceremony later on next year.