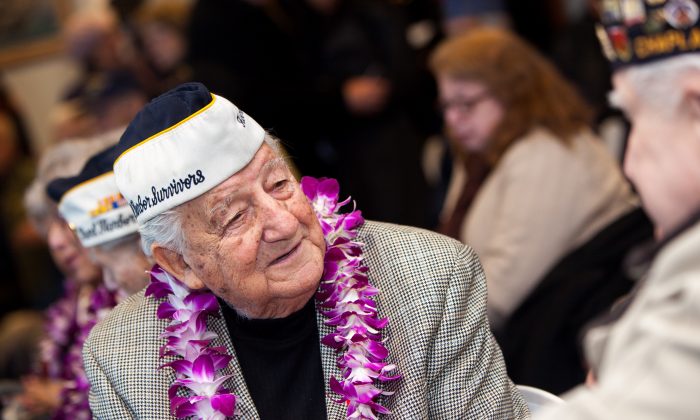 NEW YORK—It could have been just another Sunday for Bryce Galella, 17, who attended a ceremony for an anniversary of a war fought long before he was born.

The Nation was remembering yet another anniversary; dry speeches repeating big words until devoid of sincerity and meaning.

But Bryce Galella can’t be indifferent. He has blood of a hero in his veins. His grandfather, Armando “Chick” Galella, survived the attack on Pearl Harbor 73 years ago, earned the Bronze Star during the Battle of Okinawa, and, unlike many of his brethren, was able to bridge the horrors of war with a heart of kindness.

Like most others, the war took a toll on Chick Galella. He lost a dear friend in the attack on Pearl Harbor. He and John “Sully” Horan lived on the same block in Sleepy Hollow, several miles north of New York City. They grew up together, joined the military, and both were deployed to sunny Honolulu. Talking about Horan still brings tears to Galella’s eyes. He came to Intrepid Sea, Air & Space Museum to lay a wreath onto the Hudson waters for his friend and all the fallen.

Simmons was aboard USS Utah when the Japanese struck. Without officially declaring a war, droning of 344 aircraft sent by the fascist regime disrupted the idyllic peace of the far-west naval base. And then the bombs, torpedoes, and machinegun bullets came. “Man your battle stations,” the crew heard. “God bless you.”

Utah, used as a training vessel at the time, got hit by two torpedoes. In just about 10 minutes the ship rolled to the side. Then it capsized, burying 64 men. Simmons was among 461 that survived.

In all, 2,403 Americans were killed in the attack, later declared a war crime. The United States was pulled into the Second World War—with half of its battleships sunk.

The wreck of Utah still lies in the waters of Pearl Harbor, like an anchor holding the memory in place. But who still possesses it?

The anniversary is a sad occasion in a sense. Fewer of the veterans, all in their 90s, come each year. And the experience wanes with them. Yet just as dignitaries stress remembrance in their speeches, the memory may be too painful to relive for the actual survivors.

Bob Abate interviewed some 150 World War II combat veterans and one notion perpetuated—the war left scars too deep. Just a handful of the veterans ever spoke to their families about what they went through.

“Ninety-nine percent of returning veterans have experienced the most ultimate trauma of their life and then it’s the question of how they relate to it, how they handle it,” Abate said. “Some drink, some have fights, some get married six different times. But it’s all negative.”

Indeed, Galella may be more the man he is in spite of the war, than due to it. But that just makes his example all the more important.

“What I learned? To be compassion[ate] with other people,” Galella, now a great grandfather, said. “And always try to help one another. That’s what the servicemen were all about—never leave anything undone.”

And his lesson continues to reverberate.

“He just exudes that warmth,” said his daughter Donna Baer-Galella. “Friends, strangers, the family, he treats everybody the same.”

“He always makes a joke no matter what situation you’re in,” his grandson Bryce Galella said. “Anytime I’m sad or I need somebody to talk to, I can always go to him and he always just makes me happy.”

A couple of years ago Bryce interviewed his grandfather for a school project about how it was being in the war. “He just said that it was a decision to support his family and he thought that they needed help,” he said.

Both Bryce and Donna agreed there’s just something positive about the man’s perspective on life. And, as a result, that’s something they want to maintain as well.

Being around him, Donna said, inspires her to be “accepting of anyone and everyone and showing a warmth towards people.”